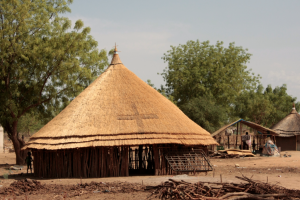 A roadside church in Bor, South Sudan.
(Photo courtesy of Food for the Hungry)

International (FFH/MNN) — There is so much to do. In your house, in your community, your church. There are responsibilities to uphold at school, at your job, with your family. As soon as you overlook something, or fail at one task, it feels like the entire tapestry of your day-to-day life unravels.

And then you turn on your TV or pick up a newspaper, or scroll through a news Web site–maybe this Web site. You see there is so much to do all over the world. There are innumerable humanitarian crises. And suddenly you feel hopeless.

The following thoughts are from Alex Mwaura of Food for the Hungry. He reminds us that it is overwhelming and that we can’t fix it. But God can. And according to His plan, He will.

For encouragement, read on:

As an aid worker, I am often tempted to throw in the towel when I am faced with humanitarian situations that seem irreparable. When I visit communities and interact with hopelessness, suffering, pain, lost dreams as a result of war, disease, and mostly bad governance, I often find myself sighing: “It’s too broken. It cannot be fixed.”

Allow me to illustrate what I mean. Let’s consider some of the current, key humanitarian crises around the world.

When Typhoon Haiyan descended on the Philippines, it left grand destruction of property and with no doubt a jolt to the economy with 10% of the population affected, at the time. Millions continue to bear the brunt of the disaster.

On December 15, 2013, fighting broke out in South Sudan plunging the world’s newest country into the dark days when it hosted Africa’s longest running civil war. Everybody hoped and called for the fighting to stop. But it didn’t. Instead, the inevitable happened. Close to one million people have been internally displaced. This means 1 in every 8 people do not have a home. Even worse, the claws of famine are quickly gripping the country, and 1.25 million children face malnutrition. A recent report by the BBC mentioned that residents of a village had resorted to eating water lilies because there was no food available. UNICEF estimates that up to 50,000 children could die of malnutrition by the end of the year if they do not receive help. The stats are grim.

The deadly Ebola virus is now rapidly spreading in a number of countries in West Africa and has, to date, claimed the lives of more than 2,200 people. The current outbreak has been termed as “the deadliest” since the virus was discovered in 1976.

So now everything seems blurry — what next?

With stats like these, it seems like we’re losing ground in the fight against poverty, disease, and suffering around the world.

In photography, before taking an image, we point the camera to the subject prior to releasing the shutter. If you look through your viewfinder at that moment, the image is often blurry and out-of-focus. But if you press the shutter button halfway, the image sets into focus, and you can click to take your picture. Note that even though blurry, the good image was always there. I think God is calling us to press our shutter buttons halfway and refocus our hope on Him. In John 16:33, Jesus encouraged His disciples who were sad that He was leaving them, saying,

“I have told you these things, so that in Me you may have peace. In this world, you will have trouble. But take heart! I have overcome the world.”

As I finish writing, my shutter button is pressed halfway. I am now able to see beyond the engulfing suffering in the world and focus on being part of God’s redemptive plan for humanity. I cannot afford to throw my hands in the air and give up! We are called to press on until physical and spiritual hungers are ended worldwide. So if you are like me, almost giving up the fight, take heart and join us in our work, for He has overcome the world!

Take a moment to pray for the needs mentioned. Remember that prayer is a very good way to focus on what God has for you to do. It serves as reminder that HE is in control.

Here are some more stories about what FH is doing around the world.