Ukraine (MNN) — Many European leaders are hoping economic sanctions and diplomatic talks will keep Russia at bay, but that may only be positive thinking. Russian separatists continue to use high-powered and technically-advanced weapons to attack Ukrainian troops, taking even more territory in eastern Ukraine. 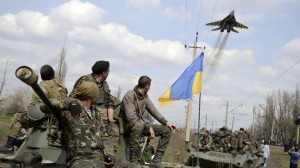 Yesterday, United States President Barak Obama and German Chancellor Angela Merkel told the world they are united in their stance on Russia. What about sending arms to Ukraine? Most European countries, including Germany and France, oppose that, arguing that doing so would only make the conflict worse.

Today, no one knows how many people have been killed in the 9-month conflict. Some say 5,300 have died in the war. Others suggest it could be as high as 50,000.

Amy Richey with EFCA ReachGlobal is in Kiev, Ukraine. “We know that repeatedly they have called more people up to serve in the military for those who have served previously, so I certainly don’t doubt that thousands have been killed, but I don’t know the exact number.”

While the world hopes for a ceasefire between Ukraine and Russia, another tragedy is taking place: human trafficking.

Richey says a poor economy has created a major problem. “A year ago November, the exchange rate between the U.S. dollar was eight to one. And today, it’s twenty-five to one.”

Pray for Ukraine as violence continues.

Richey says many young women are trapped. “There’s much more desperation to get out and have hope in a different structure than the current economy. It has been a very dire situation for trafficking in Ukraine and surrounding countries.”

Security in government has been stripped away. “As a result, I still find people much more willing to talk about views about God. It certainly is an open door and helping people come to an understanding of who their Savior is.”

Richey is asking you to pray the God will change the heart of President Putin. She’s asking that God will intervene and make it obviously clear it’s from His hand.

Listen to the complete interview with Amy Richey below.