Pakistan (MNN) — Pakistan is back in the headlines following another round of violent attacks.

The bombing of a Shia mosque left at least 49 dead on Friday, and nearly 300 Charlie Hebdo protestors invaded a Christian school elsewhere in the terrorist hotbed.

The attacks occurred despite governmental claims to “crack down” on Islamic extremism, which in turn leaves some people scratching their heads, wondering how to defeat terrorism in Pakistan.

“There are so many terrorist cells and different groups operating in Pakistan,” observes Bruce Allen of Forgotten Missionaries International (FMI).

In light of the Peshawar school attack, police are giving some female teachers licenses to carry firearms, along with training so they’ll know how to use them.

The most recent provocation came last week, when approximately 300 Charlie Hebdo protestors raided a Christian high school and called for its closure. 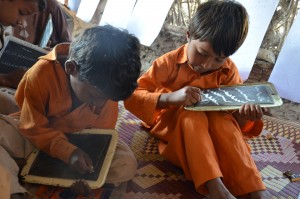 Morningstar News reports that the protestors–mostly Muslim students from local schools and colleges–stormed the Panel High School for Boys and went on a rampage, destroying school property and demanding the school’s immediate shut-down.

“Charlie Hebdo is a magazine in France; why are people protesting against a Christian school in Pakistan?” Allen asks.

He says the answer connects these Charlie Hebdo protestors with a string of recent mosque bombings, including Friday’s attack.

“They’ll do that by inflicting damage and shame against anyone who is in their path, anyone who disagrees with them.”

There is a silver lining, though.

“People are responding to the hope that Christians are sharing in Pakistan,” reports Allen.

“There’s no evil, no chaos, no terrorism that is greater than Jesus Christ.”

Those wondering how to defeat terrorism have just found their answer. But Pakistan’s ever-present reality means “Gospel-carriers” are at high-risk. You can help FMI keep them safe here.

For all places of worship, whether indoors or outdoors, Christians remove their shoes to indicate the space is holy ground. Typically, men sit on one side of the meeting area (or the front) and women sit on the opposite side (or the back).
(Photo, caption courtesy FMI)

“FMI supports three safe houses across Pakistan: one for men, one for women and children, and another one that’s for ‘overflow,'” says Allen.

“It’s a sad thing to need overflow [space], but I guess that’s the point Pakistan is at right now.”

“It costs about $600 a month for the medical supplies, the groceries, the utilities–all those ‘consumables’ that are used at a safe house,” Allen says.

By selecting “Other” on the Donate page, you can mark your funds and make sure they go toward maintaining FMI’s safe houses.

Most importantly, keep praying for Pakistan.

“It looks like it will be a long time coming before people experience peace there.”