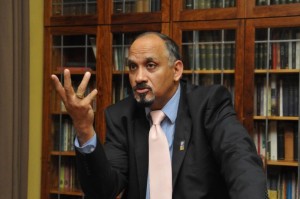 South Africa (MNN) — Often times people who have been in and out of hospitals at a young age gain a passion for the health field and pursue it as a career so they can help others.

And shouldn’t that be our reaction when someone has brought the healing message of Jesus to us: to share it with someone else?

Clive Lawler is an alumnus of Haggai Institute working in South Africa. In 1978 he became a Christian and immediately began sharing the Gospel with his classmates. In a sense, he was the child healed who then devoted his life to bring that healing to others.

Later on, Lawler pursued a career in education. He became a school teacher and guidance counselor. He got involved with Scripture Union and began to minister to the youth around him.

“I was made aware that the school that I was in was the mission field that God had called me to,” Lawler says.

For the next 18 years, he had about 1,400 learners a year with whom he was able to share the story of Jesus.

“I took every opportunity to share the Gospel and disciple young people from there.”

Now Lawler is working in a local church plant, but his main focus is on youth development and training them to share the Gospel.

He is serving as a principal at a Private Christian junior and high school where he works with 60 staff members and 300 students.

“God has given me a tremendous opportunity to mentor, to coach, to empower, and to train them up so that they can become…people that would extend the Kingdom of Christ,” he says.

From there to here

Youth development is the focus of African Enterprise where Lawler worked for 11 years.

During his time with African Enterprise, he was invited by a Haggai rep he’d been working with. He filled out the form, but it wasn’t until 2004 that Lawler knew it was the right time to pursue training at Haggai.

Lawler says the training transformed him in a very deep and personal way. His passion to share Jesus with others was affirmed and further activated.

“When I came back from Hagga,i we were given a mandate of training 100 leaders,” Lawler says. That number did not scare Lawler. In fact, he raised the goal to 1000.

He says, “I was able to train more than a 1000 within, I think, the first year because I was running leadership conferences and training conferences where we actually empowered young people to be able to go out and be effective witnesses for Jesus Christ.”

Lawler continues to do leadership conferences and other outreaches alongside his daily work.

He began working with the Alumni Association in South Africa, using the expertise he gained from Haggai.

Everywhere Lawler goes, he looks for ways to invest in the lives of potential leaders around him, whether it’s day-by-day guidance or through conferences.

Why Haggai deserves your help

When we asked Lawler why people should want to support the work Haggai is doing, he said, “The main reason is that the quality of the training is life-changing. I was transformed by the training. And how was I transformed? I was transformed in understanding that I was a key here who God wanted to use through my level of influence that I had.”

Haggai takes what already exists and transforms it to be influential for sharing the Gospel with others in the workplace and beyond.

“I began to look at my place of employment as a mission field,” Lawler says, explaining that while he has known this for a while, the training intensified his awareness of the fact and gave him the tools to be more effective.

The leadership training he continues to do teaches the same principles to others: “What we’ve been doing in the last couple of years is empowering leaders to understand that where they are in the marketplace, that is the place where God wants them to be transforming agents.”

Lawler says his main focus is to see people’s lives transformed by investing time and energy into guiding them. He stresses the credibility of Haggai and its impact.

Already, at his school he has seen his influence at work. And he shares that he is one of three Haggai alumni on staff; his deputy principal and senior head of department also went through Haggai training.

“God had already arranged for them to be there,” Lawler says. He was not aware of them until he arrived at the school.

This is what their presence means to him and what it means to have graduated from Haggai Institute: “I’ve got, in my school, two other credible leaders: people of integrity that I can trust and who have a real passion and a zeal to see souls being won for Christ.”

If you’d like to enable world leaders to get this important and helpful leadership training, support Haggai here.