International (MNN/IMB) — [Editor’s Note: This is story was recently released by the Southern Baptist International Mission Board.]

What can you do with $128? Go to an amusement park? Afford a fancy dinner? Buy that television series you’ve been dying to get?

The Lighthouse at Conestoga Mission in Monroe, Georgia, recently collected $128 for the Lottie Moon Christmas Offering for international missions, which may seem like a drop in the bucket to many, barely worth mentioning.

But in God’s economy, a “little” can be a “lot.” All gifts to the offering are used to support missionaries overseas. On average, the cost to support a missionary for one day is $139, which includes housing, salary, children’s education, medical expenses, retirement, and more. 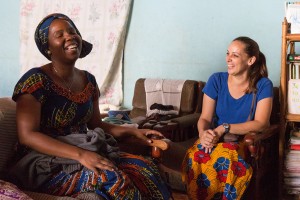 Missionary Heather McAfee and Viviane Kassou pray together in Viviane’s home before setting out to visit nearby houses in the Abobo quarter of Abidjan to share Bible stories with Muslim women.
(Photo, caption courtesy IMB)

For starters, in South Africa, it can buy 18 meals for human trafficking victims on the streets. It can give them a second chance. It’s an opportunity to demonstrate love in action and share the Gospel of Jesus with people who have lost hope. It can also purchase up to 38 Bibles to give to women in a crisis pregnancy center in Johannesburg.

In Nairobi, $128 is equal to two weeks of rent downtown. Missionaries can offer hospitality to kids in the street in forms of meals, medical care, and Bible studies.

In Uganda, it can provide almost two months’ worth of medical supplies, including malaria treatments for IMB missionaries and nationals living in a remote Karamoja village in the north.

In London, it pays for transportation for five days to prayer walk and minister among internationals in London’s Southwark borough.

And in Lesotho, it rents one Basotho pony for a missionary to travel 18 days spreading the Gospel to 18 villages that haven’t even heard the whisper of the name “Jesus.”

$128 doesn’t seem like much, but remember: people are living on dollars a day, sometimes less. Your contribution not only makes a practical difference in lives, it helps expand the Kingdom of God.

More than just rent money or food, $128 is love. It’s reaching out and showing the little girl in Syria she hasn’t been forgotten. It’s lifting up the chin of the man who thinks he’s at the end of his road and telling him, “You are special; you are loved by me and by God.”

With your support, IMB missionaries can do more; click here to help.

Pray for those living in poverty as they continue pushing forward, especially during the holiday season.