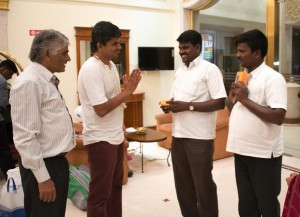 How big is God? Big enough to coordinate a reunion five years and 1.2 billion people in the making.
(Photo credit ASM)

India (MNN) — How big is God? It’s a silly question, but this story helps put His greatness in human perspective. In 2009, JP Sundararajan and an Audio Scripture Ministries team reached out to their cab drivers in India.

Sundararajan recounts the amazing journey God took him on, in his own words:

“We decided as a team in India (WCOI) that we would take a whole week off and head down south to do what was then the biggest distribution we had ever done. We distributed 1000 audio Bibles that day! Every member of our staff (including little Leila) got to participate in this special event. Following that distribution, we hired two cabs that would take our WCOI team up the hills of Kerala. This is easily one of the most beautiful parts on planet earth. We spent the rest of our time at a beautiful facility refreshing our hearts and sharing stories of God at work in us. We needed this time apart to bond as a staff, considering we had never done it before!

I must explain that when you rent cabs in India, the protocol is that cabdrivers are part of the package. These guys come with you wherever you go (lurking in the corners), eat where you eat (at a far-away table), and hang out where you hang out (out of sight). However, they never joined you or associated with your group. Simply put, they were there to drive the cars and that is all they were “supposed” to do. We did not want to make a big deal about it but we desired to be an example of God’s love to them. So when we did eat out at restaurants, we invited the drivers to join us for the meal at our table. When we did group activities, we again asked them to join us. Sometimes the drivers joined us, and sometimes they did not. But either way, by the end of the trip they were well aware of the fact that there was always an invitation open at our table. 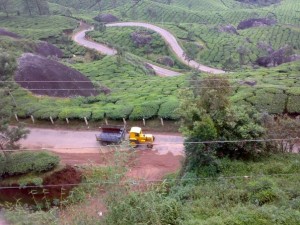 The hills and roads of Kerala take some getting used to. Plenty of roads and switchbacks form the backbone of these picturesque mountains. And as we went up and down these hills during our week, we discovered to our chagrin that most of our group suffered from motion sickness! This meant pulling over to the side of the road repeatedly so people could… ahem…revisit meals!

This must have been very annoying to our drivers, but they never showed it. They were patient and kind through the process. When our final destination was reached, I decided to take a couple of minutes to chat with these drivers. I took them aside and told them how much I appreciated their willingness to drive safely up and down the mountains, their desire to be kind and patient with our group in spite of our many travel troubles, and mostly for being amazing human beings. It was at this point that one of the drivers waited for me to finish, and then looked me in the eye and said, ”Sir, nobody has ever taken care of us like you did. You made us feel like a part of everything you did. Thank you for involving us in that. We were honored to be your drivers.” He then asked me something that continues to haunt me to this day. He asked, “Sir, those Bibles that you were giving out (at the distribution): can I have one of those?”

Now, I have the two-bit title of sorts called India-Asia director for Audio Scripture Ministries. This man had seen us embody the Gospel for an entire week, and now he wanted to know more about this Jesus whom we followed. And so he asked me–the one person on this planet who actually could help them out with these sorts of requests. The reason that question continues to haunt me is because I had to look this brother in the eye and tell him, “I am so sorry but I don’t have anymore audio Bibles to give you.” [It was] devastating because in a country like India, the odds of running into somebody like him again are astronomical, impossible even.

I shared this story with a church after I came back to the U.S. when an older lady came up to me, handed me a check for $70, and told me, “Here is money for two Bibles. This is for the next time you encounter this situation.” And for the past five years, I have carried two Bibles in my backpack as a symbolic reminder of the spiritual thirst in India and the paucity of our resources here to provide for that need. 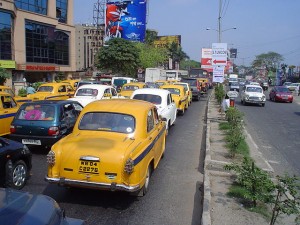 A few weeks ago I was back in India, and coincidentally, we had another meeting at the same town where we did the distribution 5 years ago. We arranged cabs yet again, and the pastor told us that he was going to use a cab company that he used last time. A big part of me surged with expectation that maybe, just maybe, we would have the same drivers. But that hope quickly turned into despair when I was reminded of just how incredibly big India is and how transient drivers are in cab companies.

Nevertheless, I packed two Tamil audio Bibles in my backpack with a fleeting hope that perhaps one of those drivers would show back up. The train trundled into our final stop. And as we got off the train, we met up with the two drivers who would be our drivers for the next couple of days. As soon as they saw us, one of the drivers looked at my father and said, “Sir, do you remember me? I took care of you the last time you were here!”

While I was very excited to hear this news, I decided to bide my time. Following the end of this trip when they dropped us off at our final destination, I told my group to wait and I brought the drivers inside the hotel lobby where we would be staying. I said to them, “I don’t know if you remember me, but five years ago you asked me for an audio Bible and I did not have any for you.” The driver looked at me with a smile that lit up the room and said, “Sir, I remember!” I told him about how much I’d been thinking about him, praying for him, and sharing his story. 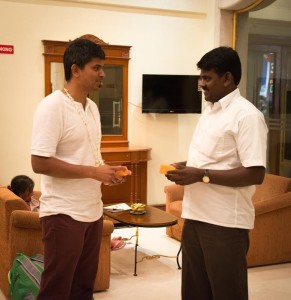 With a heart that was full, I was able to then reach out to this brother of mine and give him an audio Bible that I had carried for him symbolically for the last five years.

Reading this story is enough to put one in awe. But listening to Sundararajan tell it is even better! Click here to listen to this story in his own words, along with details left out of the print version.