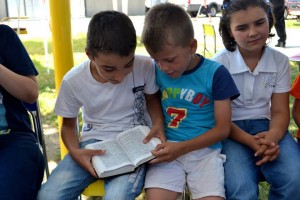 Greece (MNN) — Too many children around the world have lost their childhoods due to tragedy, abuse, violence, and many times, financial issues.

When money is bad and the world is falling apart, the importance of childhood for kids is forgotten.

AMG International is especially passionate about helping children in Greece. That’s one reason why they run summer camps each year. It’s an opportunity for the children to be kids again.

Tasos Ioannidis of AMG says, “Everybody in Greece–including the children because their families have been affected by the economic crisis that is going on–is feeling it. So there is a general attitude of despair in a lot of families because there have been so many that have lost, really, everything.”

Ioannidis puts it this way: “The crisis has killed the young people’s dreams. They cannot dream of a better future.

“They kind of have lost hope that things can get better, and it’s important to be able to come alongside them and tell them about Christ. [We want to] love them in the name of Christ and tell them that no matter what happens, Christ always loves them.”

The camps are an opportunity for the children to feel loved, have fun, and forget about the hard things in life for a little while.

As a whole, Greece has few resources to support ministries like summer camps.

“When you look at the economic situation in Greece, income for local ministries and local churches has decreased by 40-50% since 2009,” Ioannidis says.

As most families cannot afford to send their children to summer camps, contributions from the outside world are necessary.

Depending on what type of camp, admission is $80-100. If you’d like to support the camp, click here. Make a note that you want to support children going to Grecian summer camps.

The impact of these summer camps is much greater than you might expect.

Ioannidis says, “What is so neat about this event is we have people from Greece and also from different foreign nationality groups that have migrated to Greece over the years. Greece is like a hub of people coming from Asia, the Middle East, from Eastern Europe.”

For years AMG has ministered through summer camps and through their Cosmovision Center. The Center serves as a family and youth outreach through sports.

They have various programs for groups of people who speak a different language.

Where the Gospel comes in

Ioannidis says telling the children about Jesus is one of the main reasons they run the camp. “A big component of the activities is to share stories from the Gospel.”

And the results they’ve seen have been amazing. Children who entered the week hopeless left with the best and truest hope there is.

“We have seen many kids come at the beginning of camp not knowing Christ and being in a place where they are resentful and they are angry. And we have seen them leave camp with Christ in their hearts and completely changed. It’s amazing to see how God uses camp to change the lives of those kids,” Ioannidis explains.

This summer, pray for wisdom for the camp counselors. Ask God to work in the hearts and lives of the children who go to the camps, and in their lives of their families as well. Ask God to give them strength and encouragement and hope in Him.