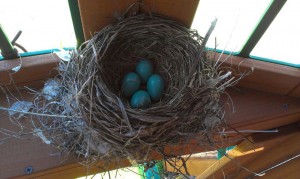 Spring is usually the season of new life. But for
Keys for Kids, new life is coming in October.
(Photo credit Kelli Gessner via Keys for Kids Facebook page)

International (MNN) — For Christians, spiritual rebirth through Christ means new life and, usually, a new purpose. For a Michigan-based children’s ministry, rebirth also means new life; but, its purpose is staying the same.

Terre Ritchie, Executive Director of Keys for Kids Ministries, says His Kids Radio, formerly a production of Cornerstone University, is being reborn and re-branded as Keys for Kids Radio.

“We have talked with all of the original alliance members from HisKids.net, and they’re all excited about it,” says Ritchie. “We just moved into a brand new building, [and] we have created a studio in our new offices for the Keys for Kids Radio.”

Ritchie says Keys for Kids hopes to have everything ready by October 23: the 25th anniversary of His Kids Radio.

His Kids Radio hit the airwaves in 1989 and was carried throughout West Michigan on WCSG, a donor-supported radio station owned by Cornerstone University.

“[His Kids Radio] was created under the Cornerstone University umbrella, here in Grand Rapids, all those years ago. A lot of work went into that; Dodd Morris, Lee Geysbeek, and a lot of people were involved in that,” Ritchie shares.

Moving His Kids Radio to the Web in 2006
opened a new realm of possibilities.

In 2006, Cornerstone Radio executive Lee Geysbeek and His Kids Radio Director Dodd Morris transferred His Kids Radio to the Web. By shifting their collaboration of Christian children’s programs from a West Michigan station to a platform that could be easily accessed by listeners worldwide, HisKids.net opened a new realm of possibilities for the radio ministry.

“For the last six or seven years, it hasn’t been running with anything new on it; it’s kind of been running in a ‘jukebox’ form,” Ritchie says.

“They [Cornerstone Radio] have offered us the opportunity to take that over, and as a fully-run kids’ ministry…. We are more than excited about this.”

Ritchie plans to keep the purpose of His Kids Radio the same: pointing children to Jesus through radio drama. It’s just getting a face life, name change, and new voice through Keys for Kids.

Keys for Kids Radio will still carry the same programs that were on His Kids Radio: “Paws and Tails, Wee Kids, Karen and Kids, Kid’s Corner; soon to talk with The Pond,” shares Ritchie.

While everything looks to be in line for the October launch, Ritchie says your help is still needed in a couple of key areas.

“We really need a lot of prayer, especially [after] going through all the changes we have this year,” Ritchie states. “Remember to pray for the people in this organization. We are few, doing a mighty job.”

Financial support is also needed and appreciated. Click here to make sure Keys for Kids Radio stays on the air.

And, Ritchie adds, they’re looking for a few more voices to add to their children’s programming. If your child is between the ages of 6 and 12 years old and would like to provide voice work for one of Keys for Kids’ shows, contact the ministry by calling (616) 647-4500.

Listen to the full interview to hear why radio is still relevant in today’s digital world.