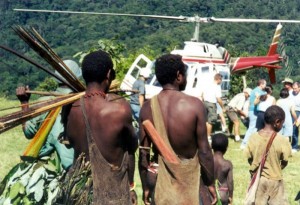 Visiting a Hewa village on a previous occasion.
(Photo and caption courtesy of New Tribes Mission).

PNG (MNN) — Papua New Guinea is a mixed bag of reactions when it comes to sharing the Gospel. Some people respond with joy and excitement and are eager to hear more about Jesus. Others cling to their old religions and reject the life-giving news.

New Tribes Mission witnesses many exciting things going on in PNG. This past week, for instance, they were able to present the newly-translated New Testament to the WAXE people after many years of building relationships with the group.

However, they also experience hard hearts and the devastation that brings to entire tribes of people.

Jonathan Kopf, a missionary with NTM, met with Hewa tribal leaders over the weekend to beg for the lives of four women and their families.

In response to a measles outbreak in August 2014, Hewa village leaders called for a “court” meeting to decide which women were causing the deaths. As a result, it was decided that four Hewa women were responsible. Now, men are planning to kill these four women, their children, and their grandchildren.

As of now, there’s no report on how the meeting went, but you can still pray. The major concern is that the Hewa have not shown any interest in the Gospel, so common ground for discussion will be hard for the missionaries to find.

For there to be any change in these practices, it will have to start at the heart. Pray that God will soften the hearts of the Hewa and that they would embrace Jesus as their Lord. Pray for the safety of these women and for the eradication of witchcraft in the land.

Pray also for wisdom for Jonathan Kopf and his team as they continue reaching out to the Hewa. 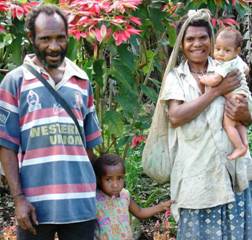 This is Susana and her husband; he was killed shortly after the photo was taken. Susana is one of the four women facing a death sentence.