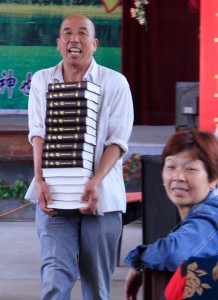 China (MNN) — Did you know that it IS legal for a Chinese citizen to own a Bible?  Or that there is a printing press in China that pumps out hundreds of thousands of Bibles a year? Did you know that, by some estimates, there are probably 100 million Christians in China?

Seems like a ready-made solution, right? So what’s the problem? Why do so many Chinese Christians wind up copying pages, memorizing chapters, and sharing a single Bible in a village of hundreds?

Bibles For China says many people living in rural China barely earn enough to cover basic needs. A Bible seems like a luxury, but for those who already know the love of God, it’s food for existence. So they pray. The following story was shared by a Bibles For China team member on a recent visit:

“Each day of our team’s Bible distribution, we handed out thousands of Bibles in rural China. Sometimes it is refreshing when we are able to slow down and get to know the believers in the churches we visit. Such was the case at the outdoor Church in Henan Province. As we were passing out Bibles, so many of the believers smiled and graciously thanked us. But as I placed a Bible into one man’s hands, he openly wept. I really wanted to know the story he had to tell. 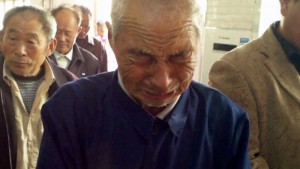 Through his tears he explained, “For three years, I have been asking the Lord if there was any possible way to receive my very own Bible, I would be so happy.” This was his day. As he told the rest of his story, my eyes also filled with tears of joy. This was a holy moment, only made possible by divine planning.

We sat down together, and I showed him the 23rd Psalm. I quoted it in English, and then he started reading it, then singing it for me in Chinese. When he reached verse 6, “I shall dwell in the house of the Lord forever,” he sang it over and over. I turned to Psalm 145, and with hand signals showed him that was my favorite Bible passage. As he read it, he was overcome with emotion, By the time he reached the end of the chapter, the Holy Spirit once again touched both our hearts, and the tears flowed.

God gave me a wonderful assignment: to serve on a Bibles for China team and give Bibles to waiting, praying, believers in China. Lives are changed, believers are encouraged, and the church is strengthened. I pray that Bibles for China teams will deliver Bibles again and again so that China becomes a shining light and a nation that gives all glory to God!”

BFC President Wendell Rovenstine just returned from a visit to rural China last week. Eight hours away from a major city center, their team finally arrived at a church they partnered with last year. “We were able to give out 6,500 Bibles in that area,” says Rovenstine. “It was a wonderful experience, a tremendous opportunity we saw. It gave us real hope that this year we’d duplicate that several times as the Lord leads us and gives us opportunity.”

Rovenstine is careful to stress the role their teams play alongside the China Christian Council churches. Because BFC works within the regulations China sets down, they’re allowed a lot more access and can get more done. Specifically, they are merely there by invitation, and their teams help the CCC churches get their job done. “We’re not there to hand out Bibles–that’s the responsibility of the local Chinese Christian church. We always have opportunity to distribute the Bibles; but to give Bibles: that’s their responsibility, and we’re just there to observe and celebrate with them.” 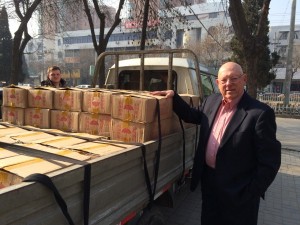 Gone are the days of smuggling 15 Bibles into China in a suitcase. The effectiveness of thousands of Bibles is exponential, adds Rovenstine, but it doesn’t happen without preparation. “First of all, I ask for prayer. Then, we have a Web site; most people that join our ministry start there. And then, if the Lord lays it on somebody’s heart to provide a Bible for $5, that converts in my mind to a person sharing that Bible–to a person giving that Bible to their family. So it touches multiple people.”

According to BFC, one of their “in-country” partners conducted an informal survey one year after a Bible distribution. Notes their Web site, “Their findings were that many of the Bibles had been read cover-to-cover in six weeks, most Bibles were shared with five others (both friends and family), and three of those five committed their life to Christ after reading the Bible.”

Villages are changing. Lives are changing because people are finally feeding on God’s Word. The key is accessibility and availability. Want to be part of the change? Click here.