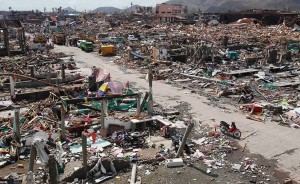 “Many are suffering, and this will last for months and even years without God’s help and healing grace. So we pray that God will bring healing through the prayer relief team that we will deploy to the different places in our country where we have our network of churches.”
(Image, caption courtesy World Mission)

Philippines (MNN) — Typhoon Haiyan seems to have changed the face of any and all Filipino islands that stood in its way.

According to the U.S. Agency for International Development, 16 million people were affected by the super storm; the destruction of over a million homes resulted in 4.1 million people being displaced and at least 6,000 people perished.

See before and after pictures of the disaster zones here.

More than a year later, people are still trying to pick up the pieces and start over again.

Devastation remains widespread, and recovering from Haiyan’s wrath will be a long and arduous process. With tragedy still fresh on survivors’ minds, hope and joy seem highly unlikely, even impossible.

For the past year, World Mission teams have been helping Filipino churches and individual believers rebuild their lives and livelihoods.

For World Mission, Haiyan recovery isn’t just limited to physical needs. Their audio Scripture device, called The Treasure, has been given to survivors on each trip to the Philippines.

“It’s not only what The Treasure has done–it’s softened, it’s prepared the hearts of people,” says Kelley, “but the people are also realizing that there’s more to this world than their stuff.” 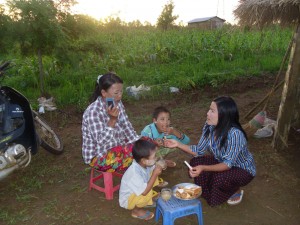 Listening to The Treasure is an everyday occurrence, as seen here in the Philippines.
(Photo, caption courtesy of World Mission)

As a result, people are trusting in Jesus instead of themselves. A short-term mission team of six recently visited the Philippines with World Mission, and they saw approximately 2,000 people surrender their lives to Christ during their visit.

It all starts with one: a single Treasure introduces 144 people to the Gospel. As those individuals share the Good News with their neighbors, the impact grows exponentially.

What does it take to start the process? Kelly says it costs World Mission $40 to load and ship one Treasure.

“That single Treasure facilitates and spawns new listening groups every single month, where people are gathering together just listening purely to the Word of God,” says Kelley.