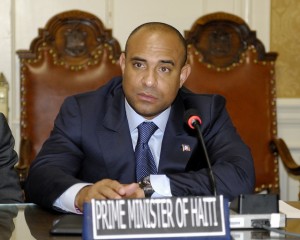 In the aftermath of Prime Minister Lamothe’s resignation, Haiti is wondering if his absence will make way for long-overdue elections, or cause more instability. When legislators’ terms expire on the 12th, President Michel Martelly will be the sole leader of Haiti, says The Economist.

We spoke to Bill Passons of AMG International to gain insight on how the situation could affect their ministry in Haiti.

Lamothe stepped down last week due to pressure from the people, and according to The Economist, it was an attempt to pacify the rowdy crowds in Port-au-Prince. President Martelly remains in office despite the people’s demand for change. John Kerry, the United States’ Secretary of State, is urging them to find a compromise instead of backtracking.

Passons says protests have sometimes turned violent and the Port-au-Prince region is in turmoil. He continues to say that with the stepping down of the prime minister, there is momentum building. The people are serious and are expecting elections to finally take place after years of delay.

January 12 also marks the 5-year anniversary of the earthquake that devastated the country of Haiti.

According to Passons, efforts to rebuild continue, and while from a world vantage point it may seem that things in Haiti have been improving, the money isn’t going to the poor.

He says, “It’s like the same thing over and over again. People come in with lots of promises, and not much changes. After a period of time they say, ‘We’ve got to have change again.’ But the extreme poverty and the instability seem to always be the constants there.”

AMG’s ministry in Haiti is located in Cap Haitian, away from the raucous crowds of Port-au-Prince. There they have two schools that serve around 1500 students.

While the protests haven’t directly affected operations in Cap Haitian, Passons does expect that the implications of the political standoff will reach them eventually. He says, “Anytime there’s a change in leadership and a new government steps in, they’re going to have their policies and their things they want to enact. That always will have an effect on the country as a whole, and so we would also feel those effects, too.”

With ministry and the country’s health in mind, Passons says we need to be praying.

“We need to pray for stability there and that the government will be stabilized–the whole situation will be stabilized. They’re not in a position to recover from more and more of these self-made disasters of political means. So they need to have a stable situation so that they can set the ground work to build a system to where all of Haiti can kind of rise up from the extreme poverty that it’s in.”

Passons encourages us to be praying for wisdom for the current leaders and ask God to set people in place where He wants them. Also we can pray that corruption would cease to be the political norm in Haiti.

Would you ask for God’s protection over any ministries that are currently working in Port-au-Prince?

Passons hopes that through this disorder, the people of Haiti would look to someone higher than their president and the Haitian government.

“As the Gospel message is preached, even in these times of turmoil and trouble, that rings even more true and clearer in their ears as they see all the instability around them.”