Zambia (MNN/KAI) — Moments can define and refine a life.

June 2014, a group of eight went to Zambia, Africa, for a week-long missions trip, and the all-too-short week changed their lives and hundreds around them.

Working with Kids Alive International, the team missioned at an orphanage and to vulnerable children in Kids Alive’s program. They built a playground and got to know many of the kids.

One team member, Lauren McKinney, said she had met a little girl named Naomi who held her hand and sat on her lap everyday. “Just in that year alone, her mother died, and then her father; then she was staying with her grandpa, and he also died.”

As their hearts opened wide to the kids, the team learned that Kids Alive could no longer stay in their current facility. 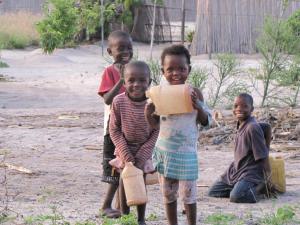 As a result, the group set up a non-profit organization called Kottages 4 Kids. Their goal is to reach $200,000 to build three orphanages in Zambia.

Team member Mackenzi Denney says, “The most important thing that you get to be a part of is that you get to give them hope for the future. You donate and you give them shelter, which then gives them education and food. And that’s a future.”

Already, the group has raised about $25,000. They have been able to provide a water storage tank and water tower, but are still in need.

Pray that Kottages 4 Kids will meet their goal and help provide for orphans in Zambia.