Greece (MNN) — A recent photo-essay showed a sad reality in Greece: a decade after it was built to host the 2004 Olympic Games, the Athens site is in ruins.

Despite a weak economy, the country met an ambitious construction plan for new facilities to meet the demands of athletic competition and spectators. Several went nearly 10 billion Euro over-budget. The crushing debt along with a recession contributed to the eventual economic depression.

Even as the country is struggling up from rock bottom, there are some whose stories are different, more purposed.

AMG International president and CEO Tasos Ioannidis says the CosmoVision Center was built in time for use during the Games. But rather than fall to ruin, today it serves as a center for outreach to Greece’s evangelical minority. “It is a place for a family ministry for the evangelical community in Greece. It is a place where we have camps for local kids and also immigrant kids.” 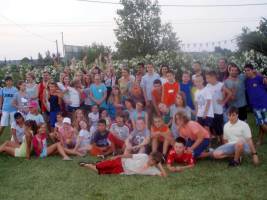 Why immigrant kids? Ioannidis explains, “Athens is a hub for refugees coming to Europe from the Middle East and from the Far East. A lot of immigrants flow through Athens, and immigrant churches are meeting at the Cosmo Vision Center.”

AMG’s CosmoVision Center just wrapped up two weeks of camp this summer, reaching out to 60 Polish kids from the streets of Athens, Greece. Ioannidis notes, “A lot of them (Polish immigrants) live in material poverty. For the last three summers, we’ve had camps specifically for the Polish kids.” The first week was for children from 6-12 years of age, and the second for teenagers ages 13-17.

AMG’s camps provide a few days off the streets of Athens, embracing them with the love of Christ. “They come there, not only to have a great week in which they are able to have fun and to play, but the majority of the Polish kids that have participated in those camps have come to know the Lord as personal Savior.”

The ministry teams are truly living up to their name at the Cosmo Vision Center, where a Christian worldview is laid out and connected to all walks of life. The Center provides a unique opportunity to introduce underprivileged children to the kingdom of God.

Notes AMG missionary Fotis Romeos (from the AMG vlog), the highlight of the week will be the family celebration on the last day of each camp program, inviting all the families to come and let their children share with them what they have learned. 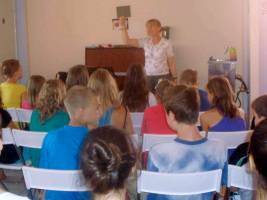 10 years after the Athens Olympic Games have passed, the AMG Cosmo Vision Center is thriving and growing.   Strategically located just seven miles from the Athens International Airport, the CVC remains a one-of-a-kind multipurpose facility designed to address the spiritual needs of families, youth, and children of Greece and beyond.

Given the recent financial disaster that befell Greece, they need help to keep that growth moving. If you’d like to become a CVC partner, click here for ways you can get involved.