USA (MNN) — It’s been months in the planning stages. Now, Christian Resources International is ready for what could be an historic series of events in the Philippines.

CRI Executive Director Jason Woolford, his son, and the Michael Maher Band will be a part of a Gospel team heading there this week for Gospel meetings, a free concert, and a book and Bible distribution.

MNN told you about this event on previous newscasts. Woolford says with your help, CRI is sending free Bibles and Christian books worth more than $3 million to six different locations in the Philippines. As part of that effort, they’ll also be opening a CRI distribution center in the north. Lord willing, this distribution center will be an ongoing source of Christian resources for years go come.

According to Woolford, there are still many in the Philippines–new Christians, rural pastors, and evangelists–who still need Bibles and Christian books to help them not only grow in their faith, but lead congregations.

That’s not all. In addition to the shipment of books, Woolford and his team will travel to the Philippines to hold Gospel meetings. The trip is scheduled for the first week in October. “I’ll be ministering in the Cuneta Astrodome in Manila. We’re expecting a minimum of 10,000 people [to] come and hear a free concert from the Michael Maher Band and then be ministered to. Each person will walk out with a free Bible or Christian book.” 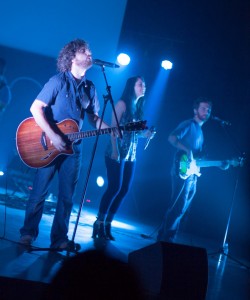 The Michael Maher Band from the Detroit area will join a CRI Gospel team heading to the Philippines this week.

The Michael Maher Band will also be presenting a free concert at the Gospel meetings.

Woolford says, they stepped out on faith for this outreach. “That’s kind of on my mind, but God always…touches the hearts of the right people at the right time to give financially, so I know He’s going to bring that to pass. So, if listeners want something to do and pray about, those are things for sure.”

By supporting CRI, you become an international missionary without leaving your home.

How will you know if you’ve been effective? Woolford says, “When you get to Heaven, there will be people there who will greet you and say, ‘It was me who got the free gift of God’s Word that changed my life for eternity.'”

The impact will be profound, says Woolford. “This specific [Gospel meeting], Bible give-away, concert is expected to impact five million people in the next six years. So you can imagine the impact and the fruit that will have.”