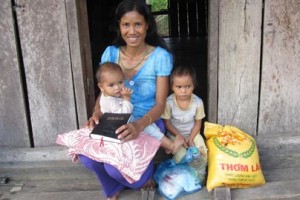 India (VOM/MNN) — God’s Word isn’t returning void in India. Even though persecution, beatings, and threats to believers continue, the body of Christ is growing with help from Voice of the Martyrs Australia.

Sanju, a young Indian woman of 25, grew up as a Hindu. Her husband has opposed her new Christian faith since she accepted Christ. With no money of her own, she had asked her husband to buy her a Bible, but “he verbally abused me for wanting a Bible and being a Christian,” she said.

In addition to being angry about her faith, Sanju’s husband was deeply angry with her because she hadn’t provided him with children. “When you give me a child, then I’ll get you a Bible,” he told her. It was almost as if he were challenging God to give him what he wanted. He refused to provide for the wife who was “shaming” him by not bearing children. Sanju’s in-laws also pressured her to provide them with a grandchild, blaming her inability to do so on her foreign beliefs.

One day at church, Sanju was given a Bible, thanks to support from Voice of the Martyrs Australia. Sanju felt that God was answering her prayer for a Bible, and she hopes it will be a testimony to her husband and her in-laws.

VOM is also helping a pastor in India and his family with Gospel kits, transportation tools, and Bibles–all to help them share the Gospel. This pastor has been faced with so much persecution.

He has received threats from members of the Vishva Hindu Parishad, a militant nationalist Hindu group who is known for beating and harassing Christians.

In years since, this pastor and his family have been forced to move 8 times because of threat. Despite all this, he continues to share the Gospel and lead a house church of 150 people while overseeing 300 other home churches in the area.

The pastor is one of hundreds of front-line workers VOM is supporting in India.

Continue to pray for VOM workers and their ministry. Pray for protection against those who would try to stop the Gospel from being preached. And consider sponsoring a VOM mission worker through VOM’s Web site.