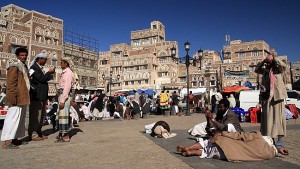 As political upheaval dating back to the Arab Spring continues in Yemen, United Nations Special Adviser Jamal Benomar expressed concern that the nation is moving toward civil war. The U. N. Security Council met on Sunday to discuss the mounting crisis in the Middle Eastern nation.

The ancient city of Sana’a has been the site of violent protests recently, resulting in the resignation of the country’s president, followed by the withdrawal of his resignation.

“Peaceful dialogue is the only way forward,” Benomar told the Council. In assessing the situation, he said the country is in a “rapid downward spiral” and at “the edge of civil war.”

As violence escalated between the country’s ruling Sunni Muslims and rebel Houthi Shiite Muslims, both the United States and the United Kingdom withdrew security forces. The U.S. closed its embassy in Yemen in February

Last week [March 20] in the Yemeni capital of Sana’a, suicide bombers attacked two mosques linked to the Houthis, killing at least 126 people and wounding hundreds. A Sunni group claiming to be a branch of ISIS said they were responsible for the bombings.

Yemen is home to al-Qaeda in the Arabian Peninsula (AQAP), one of the most powerful branches of the terrorist organization. AQAP denied any involvement in last week’s attacks on the mosques.

On Sunday [March 22], Houthi rebels took control of an international airport and government buildings in the city of Taiz, 240 miles south of Sana’a. 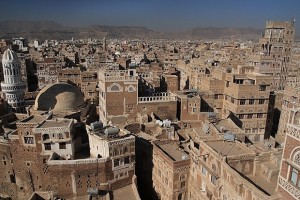 In January 2015, the rebels surrounded the presidential palace in Sana’a. Days later, Yemeni President Abd Rabuh Mansur Hadi resigned. He has since rescinded his resignation and made the Red Sea port city of Aden his provisional capital. There is increasing concern that the likelihood of civil war grows as the rebels continue their push south.

Greg Voss,* a Christian worker in the Middle East, said, “Honestly, most Yemenis would rather go back to the days before the Arab Spring.”

Despite the lack of religious and political freedom, their lives had far more stability: consistent jobs, electricity and water, and school for their kids. Now, much of this has vanished. Yemen currently has one of the worst humanitarian crises in the Middle East. More than 10 million people need food assistance, and 13 million cannot access clean water.

Tens of thousands in Yemen’s capital city of Sana march, demanding an end to political unrest in their country.

However, the tumultuous repercussions of the Arab Spring have forced many to question much of what they thought secure.

Yemen is south of Saudi Arabia, the heart of Islam. Traditionally, northern Yemen has been tribal and religiously conservative, adhering to the strictest interpretation of Islam and thus quite hostile to Christians. Southern Yemen has typically been less hostile toward the gospel than the North, though still quite restrictive.

In both the North and South, believers continue to live out their faith as boldly as they can and support one another amid the trying physical hardships they now face.

Voss urges believers to remember that God is sovereign over all of this and that He continues drawing Yemenis to Himself.

Another Christian worker said, “At times it seems hopeless. However, our trust is not in governments or coalitions or politics. We trust in the sovereign God of history. He is working and moving, even in Yemen.

“The upheaval has caused many Yemenis to reconsider much of what they thought secure and stable in their lives. They are asking questions and seeking answers. For many of them, this means greater spiritual openness as well.

“Pray [that] this spiritual openness would continue to increase and many would know the peace of Jesus. Pray [that]  those who lost family and friends in the bombings would know the God of all comfort. Pray [that] believers in Yemen would support one another [and] shine as beacons of Christ’s love in the midst of the darkness.”