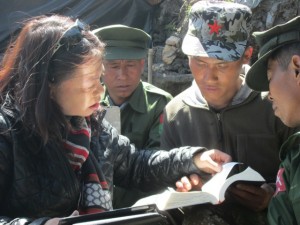 Burma (VBB) — In Burma, God is drawing soldiers closer to Himself in the midst of war.

Free Burma Rangers released a report saying attacks in the Southeast Asian nation are the highest they’ve been since fighting renewed in 2011 after the 17-year ceasefire was broken. Karen News cited Human Rights Watch saying the conflict had led to more than 100,000 displaced civilians.

Despite the danger, a Vision Beyond Borders contact is putting her life on the line to minister to Kachin soldiers on the frontlines.

The courage and compassion of this dedicated believer puts life in perspective, says VBB’s Dyann Romeijn. “Things in this life might be fatal, but they aren’t final. And it’s an example of a modern day person living out that type of faith, that belief that what God calls us to is much more important than our personal safety.”

The soldiers were overjoyed by a recent visit by the contact, shared the contact to VBB, and many were hungry for the Gospel. The team brought Bibles, gospel bracelets, medicine, and shared Scriptures.

The Captain of the army shared that the Kachin had not been living out their faith, but since the increase of the attacks, they have become more faithful to God. “Before everything we do–a meeting, going to the frontlines, we always pray first,” said the captain in a VBB release.

“It’s actually given them opportunities to truly call out to God more to be their Protector and to sustain them,” says Romeijn.

The Captain testified to VBB about God’s amazing protection: “In August 2013, I prayed before a fight: we killed our enemies and took their post. We were 40 against 400.”

“We do need to pray for their protection and for God’s shield to be around them because there’s a lot of death, a lot of dying all around them,” says Romeijn. “But, in the midst of that, God is doing a mighty work of revival.”

As you pray, you can also support the work of VBB financially. Click here to help.