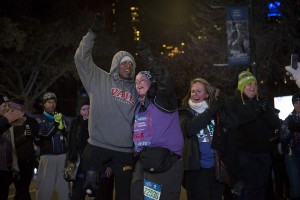 Gena Wilson completed the NYC marathon
after more than nine hours of walking.
She crossed the finish line with U.S. Army veteran
Cedric King. A photo of King and Wilson at
the finish was featured in the November 6, 2014,
issue of Time magazine.
(Photo, caption credit IMB)

Scotland (MNN) — Overcoming life’s challenges is a feat everyone must face at one point or another. How a person overcomes said challenges shapes character and reveals faith.

Gena Wilson, a Southern Baptist missionary serving in Glasgow, Scotland with the International Mission Board (IMB), is no stranger to challenging circumstances. But she knows Who has gotten her through each trial and openly gives Him the credit.

“God has been so, SO gracious in my journey, long before cancer but especially during it, along with leading up to the NYC marathon yesterday,” Wilson stated after walking the entire New York City marathon in early November.

Today, the two-time cancer survivor is back in one of Scotland’s poorest communities, using her experiences to point young people to Christ.

As part of IMB’s ImpactGlasgow Team, Wilson builds relationships with impoverished young people through sports, Christian clubs, tutoring, and community outreach. The Lord has used many trials in Wilson’s life to show His mercy and strength to the people she encounters.

For example, in 2011, Wilson was forced by her first bout of cancer to return to the U.S. for treatment. While battling non-Hodgkin’s lymphoma, she sent messages of encouragement back to Scotland via social media.

“It’s so good that this happened, even if all that [God] wanted to accomplish was to teach me how to trust Him even in the midst of suffering,” Wilson said in a special Christmas message to the students she mentored at Springburn Academy.

When cancer revisited Wilson last year in the form of a brain tumor, she was quick to reiterate the source of her hope. 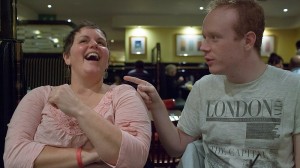 Gena and Graeme, one of the young people she mentored.
(Photo credit IMB)

“God’s goodness is not defined by my health. Cancer can’t touch heaven. The best is yet to come,” she stated.

Overcoming cancer twice and walking a marathon in nine hours has renewed Wilson’s passion for proclaiming Christ in the greater Glasgow area. In 2015, she and her team will be bringing the love and hope of Jesus to the darkest areas of Glasgow: places where drug and alcohol addiction, teenage pregnancy, chronic unemployment, and violence run rampant.

Will you help Gena Wilson and her team overcome Glasgow’s darkness with the light and hope of Christ?