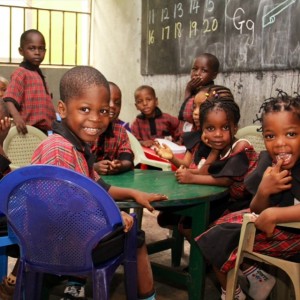 VOM currently supports 300 Nigerian children who have lost their father or mother, or both, in attacks by anti-Christian extremists. VOM helps by providing a Christian education and loving care at The Stephen Center, a children’s home and school in a safe part of Nigeria. Please remember these precious little ones in your prayers, having endured so much at a young age. (Caption and Photo courtesy of Voice of the Martyrs via Facebook)

Nigeria (MNN) — In what kind of world is it normal for whole villages to be burned and many people murdered on a regular basis? The world of Northern Nigeria.

Todd Nettleton  of Voice of the Martyrs spoke to us about one of the last violent attacks to bring in the New Year.

“There was an attack in sort of the Eastern part of Nigeria. Allegedly a group of Fulani Muslim herdsmen came into a village, attacked a Christian village, burned the church, burned the home of the pastor, and killed ten people in the village. Sadly, it’s just another day in Nigeria.”

In the constant violence and conflict, Nettleton says it’s just another attack, another village.

Nettleton says these conflicts between the Fulani herdsmen and Christians are both due to religious tension and the battle for land. It’s a fight between Christians and Muslims, and combat between herdsmen and farmers.

This particular attack took place in the Sabon Gida Shagogo village on December 17, according to Morning Star News. They report 100 herdsmen invaded the village at 4 a.m.

Nettleton hopes investigations will reveal whether or not the allegations are true.

Nettleton says these attacks took place south of the terrorist group Boko Haram’s main area of operation. While it’s not out the question that they were involved, Nettleton doesn’t think so. The Morning Star News says often, however, the Fulani herdsmen work alongside the Boko Haram, and some are even members.

Whether they were involved in this attack or not, there is a very disturbing movement occurring in Nigeria. The mindset that Christians can be killed without consequence is spreading down from Northern Nigeria into the South. These murders are motivated over the disputes for land and over religion.

Voice of the Martyrs hopes to bring comfort and support to these Christians because so many of them having lost loved ones to the violence.

“We are working in Northern Nigeria every single day […], helping churches that are burned to rebuild, helping the families of those who have been killed. There are numerous widows in Nigeria that Voice of the Martyrs is helping directly,” Nettleton says.

Their help includes providing a means of income for widows and education for orphaned children.

“We are very much involved in the Church in Northern Nigeria and standing with our brothers and sisters who face these kinds of attacks,” Nettleton continues.

You can be involved in standing with Christians as well. Give to the Family of Martyrs fund to help Christians all around the world whose loved ones have died for their faith.