China (MNN) — In Tibet, there’s a pastor of a new church who has already led 27 people to Christ and has plans to plant churches all across his region. But Asian Access says what makes his story really unique is the fact that he was once a religious leader in a completely different faith: Buddhism.

The man had spent almost 30 years as a Tibetan Buddhist Lama, or head monk. His duty was to prepare dead bodies for the next reincarnation. But as he worked, he would often wonder if what he was doing was actually effective. He was worried about what the afterlife might have in store for him.

Then, his wife became seriously ill. He used traditional Buddhist magic to try to heal her, but nothing he could do had any effect. 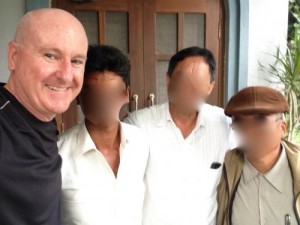 Asian Access president Joe Handley, left, with 2 Lamas and another man who have placed their faith in Christ.
(Photo courtesy Asian Access)

During the ordeal, his daughter started making friends with some of the girls from the Christian Children’s Home. She was struck by the difference she saw between these girls and the rest of her friends, and she began going to their church.

As time passed and her mother got even more ill, the little girl invited her father to church. She pleaded with him, insisting that they could help.

For months her father refused, but finally he succumbed to his curiosity and attended church, taking his wife and daughter along with him. That day, by the time he had returned home, his wife had miraculously recovered, and he committed his life to Jesus.

Since then, his passion has been to spread the Gospel to villages in his region that have no church. A group of Christians established a new church so believers wouldn’t have to walk as far, and they asked the former Lama to be the new pastor.

The man is being discipled by the leader of Asian access, and through his care, almost 30 people have accepted Christ and been baptized.

Because of his past, this man will be under extreme threat, but he has a such a heart for missions that it seems he cannot be stopped.

Pray that he will continue to spread God’s Word and bring the message of new life in Christ to the villages he cares so much for.