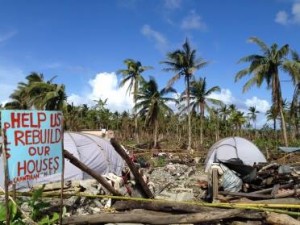 Philippines (MNN) — Commitments are hard to keep, especially when they involve a typhoon-sized problem. When AMG International decided to minister to the Philippines, they went in for better or for worse.

A quick look back

According to AMG, Typhoon Haiyan, called Yolanda in the Philippines, killed over 6,000 people and displaced millions more from their homes.

Bill Passons, Southeast Asia Coordinator, recounts the aftermath: “Initially a whole bunch of aid came in, and it was just amazing to see how the world kind of rallied around this area. The devastation in Tacloban and their eastern Samar regions there was just massive, and so many people [were] displaced and hungry and really left with nothing.”

Passons says AMG began to look into smaller towns and barangays that were away from the main city. The damage in smaller towns was the same, but there was less relief.

AMG chose a few towns to focus on in eastern Samar and utilized their network of pastors and workers to begin to address the needs in those locations.

“Initially we focused on just getting the basic necessities of life.” With the help of partners like you, AMG was able to give food and water to these people, and eventually begin building shelters.

When a large disaster strikes in a place like the Philippines, the recovery drags out for years. People continue to be jobless, homeless, and many starve. Meanwhile, the rest of the world hears “Typhoon Haiyan” and can’t remember its significance.

But, by God’s grace, AMG carries on.

Most of the families in the locations they minister to now have shelter, but there is a need for hundreds more houses. AMG plans to finish 800 more houses by the middle of next year. They’re even hopeful, if funding allows, to build 1,200 of these semi-permanent shelters.

Another issue AMG is working through is how to develop livelihoods for those whose fishing equipment got destroyed or those farmer’s whose coconut trees were ripped out of the ground.

Passon says, “There’s kind of a long process of getting these people back to some sort of sustainable lifestyle so we’ve kind of stepped in and helped do that, too.”

They’re addressing this in two ways. One, they’ve established a feeding program for families who don’t have access to food. In one small location, they’re currently feeding 800 children and nursing mothers. Secondly, they’re providing job training and assessing resources that could possibly provide an income.

They’ve helped organize communities and designate leaders so that the people will work together and help each other out. “When we can, we try to build a church or a facility there either through actual building or just a small gathering. And so we’ve seen great fruit with that, too, as we’ve placed pastors to help address the spiritual and psychological destruction that happened at that time,” Passon explains.

AMG is also continuing their regular ministries. They have close to 40 youth and developmental centers throughout the country. They also run vocational schools and camping ministries and they plant churches as well.

“Our goal has always been to spread the Gospel. We want to evangelize and to disciple people around the world. And we do that working through national leaders.”

And it is through these national leaders that AMG keeps their focus.

This is the difference between ministries like AMG and people around the world: “When the news cameras kind of shy away and pan to the next thing, this is still their home, this is still their backyard, and these are still the people that they love. And so likewise, because of our interaction with them, we have that same feeling.”

Passon says these relationships are key to ministering to the people affected by the storm.

And while they know situations like this present large physical needs up front, there is something deeper they long to help with.

“They have a great need to hear the Gospel and to get an opportunity to respond to the Gospel,” Passon says. “When we started this, the goal was never just to kind of get them back on their feet: it was always to help them, to meet their needs as a whole person–physical needs, spiritual needs, and emotional needs.”

Their efforts to answer physical needs are done in a way to establish sustainability so that eventually these people can address them for themselves.

They want the Filipinos to know the comfort and hope that comes from having a personal relationship with Jesus Christ. Passon says, “We know that that has eternal benefits, and we know that that can never be washed away by the next typhoon that comes through.”

AMG is encouraged by the number of people attending Bible studies and growing in their faith.

Of course, all this work they are doing in the Philippines is not possible without help from partners like you. Passons says financial support and especially prayer is absolutely critical to keep them going.

He asks you to pray for their encouragement, that God would lift them up, and that they would be guided to be good stewards of all that is given to them.