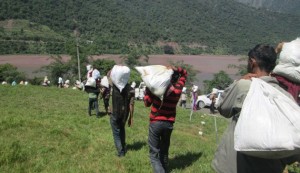 Villagers carried food packets back to their homes in the mountains where they escaped from flood waters.
(Photo, caption courtesy GFA)

Northern India/Nepal (GFA/MNN) — Flood victims in northern India are finally starting to recover from a mighty deluge that ravished their livelihoods in early September. Gospel for Asia says pastors they support are caring for 900 villagers in India’s northernmost state, Jammu and Kashmir.

“After many days, today I was able to cook some food and give it to my children,” said one of the aid recipients. “Thanks to the church that reached us and helped us to live.”

On September 5, heavy rainfall triggered massive floods in Jammu and Kashmir. Roads were completely washed away, and communication among 100 villages was cut off. Surrounded completely by water, over 1,000 villagers struggled to survive.

In the weeks that followed the destructive rain, believers in a neighboring state gathered food and basic necessities. 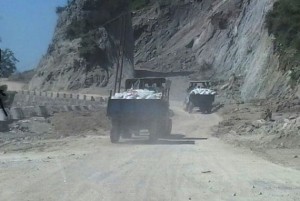 Believers from a neighboring state transported more than 300 food packets to the flood victims in Jammu and Kashmir.
(Photo, caption credit GFA)

On September 15 and 16, GFA-supported pastors transported more than 300 food kits into the affected areas and distributed them among isolated flood victims. Local authorities joined the relief efforts and helped distribute the food kits containing 20 pounds of flour, 4 pounds of beans, 2 pounds of rice, and other basic cooking essentials, along with mosquito nets and clothing.

The consistent care of believers has physically benefited more than 900 families to-date and has also demonstrated God’s abundant love.

Flood waters have claimed the lives of more than 100 villagers in this region. Please pray for the waters to keep receding, and for more families to see God’s genuine care through the relief efforts.