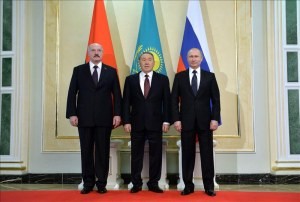 Russia (MNN) — The economic crisis in Russia and former Soviet bloc nations is growing. It’s getting serious enough that the leaders of Belarus, Kazakhstan, and Russia met together to map out a strategy for addressing their currency devaluation, the lower cost for energy, and run-away inflation. Eurasia economic woes continue to have wide-reaching impact.

According Kazakhstan’s President Nursultan Nazarbayev following their Eurasian Economic Union (EEU) meeting, “Our economy in 2015 requires a detailed discussion of our cooperation.” He says, “It will be a year of great challenges and risks” for the EEU.

The currency crisis hit a few months ago with the Russian ruble. Joel Griffith of Slavic Gospel Association says while interest rates and inflation have skyrocketed, one thing is missing. “We have not yet seen bankruptcies take places there, a shrinkage in industrial production, or mass unemployment. And how much of that is because of the government propping up certain things is a really good question.”

Interestingly, the EEU is getting ready to expand further. Armenia is now a member, and Kyrgyzstan is gearing up to join. Is this a new Soviet-Union-style situation?

Griffith has some concerns. “What impact will this have on the churches–our brothers and sisters that we’re serving over there? How is this going to impact their families? And, of course, [how will this impact] the ability of the churches to be able to travel, to evangelize, and get the Gospel out?”

The economic issues are compounding the refugee crisis in Ukraine, which SGA is also involved in.

Griffith says these colossal problems aren’t all bad news. He says many are beginning to ask questions. “They’re really struggling to try to make sense of it all, and they begin to wrestle with these eternal questions: ‘Why is this happening? What’s my future going to be?’ And that creates such an open door for the churches to come in with the eternal hope of the Gospel.”

While many have labeled evangelical Christianity cult-like behavior, Griffith says the church is changing that. “When they’re able to provide a parcel of food, and people are actually able to get to know these believers on a one-to-one basis, all of a sudden they’re finding out the stories they’ve heard for so many years aren’t true.”

Prayer is vital during this time. So is your generosity. You can find specific prayer needs and donate to SGA here.