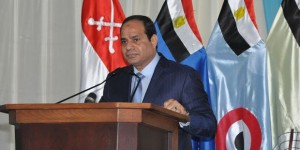 Egypt (MNN) — The anniversary of the Egypt revolution has brought good and bad. The revolution initially united the Egyptian people. As Muslim Brotherhood seized power, unity disintegrated. Christians and nominal Muslims were marginalized by radical Islamists, and the country’s economy went into a tail-spin.

It’s been four years. Since then, General Abdel Fattah al-Sisi took control. International Needs Egypt Director Brother Nathan explains. “We consider him a hero. He stood up. He arrested the president of the country. He arrested all the leaders of the Islamic group and put them in prison. Now he is the leader of the country.”

Brother Nathan says that doesn’t mean Egypt is safe. He says these Islamic groups are now underground, and terrorism is an everyday part of life. “They’re putting bombs here and there. Every day we hear about explosions happening in many parts [of the country].  [On Tuesday there were] four explosions in trains.”

Two churches were also set on fire. It appears to be a daily fight between police and the Islamists. Brother Nathan says, “They make our lives difficult. There is a feeling of insecurity. Everywhere you go, you can expect something bad to happen to you or your children.”

He says two unexploded bombs were discovered a few days ago. Had they exploded, there would have been tremendous loss of life.

While there’s great insecurity, the evangelical church is growing. Brother Nathan says, “Many Muslim people [have] discovered the reality of Islam, and thousands of them have turned to Christ. We have many groups of Muslim people who are attending churches.”

The relationship between Christians and the government has also improved. President Sisi became the first president to deliver a Christmas Eve message at a Coptic church.

As churches grow, their desire is to reach out physically and spiritually. With Egypt’s unemployment rate at 25%, Brother Nathan says International Needs is doing something about it. “We are establishing a training center to train young people and young woman for skills, providing them with tools so they can work and start a small business and earn money.”

What kind of jobs will they be able to create? Brother Nathan says, “Hair dressers, or barber, or fixing computers and phones, fixing air conditioning, refrigerators, and [learning] English.”

Listen to the full interview with Brother Nathan below.