India (MNI) — Editor’s Note: This is a blog post from Ron, a staff member with Grand Rapids, Michigan-based Mission India, who works closely with ministry partners in-country. He makes an interesting analogy worth consideration: 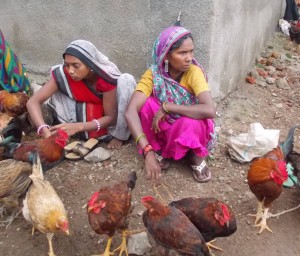 On a visit to India, we ran over a chicken. We were not driving particularly fast, but the chicken just picked the wrong time to cross the road. Because it was a rural area, and because chickens make a really loud noise when hit, we stopped to settle accounts.

I know that in the marketplace, a plucked and dressed chicken costs about 150 rupees–around $2.50. So I asked the gathering crowd how I could find and compensate the owner. They formed a little circle around the…bird, and shook their heads….

Apparently I was not going to get away with paying only for one dead hen but had to consider all the eggs and future chicks this bird would have produced.

The same spiritual multiplication is taking place in India. New churches do not rest: they reproduce. New believers share Christ with their neighbors. “Yes, all the eggs….”

New churches plant “daughter churches” in a neighboring village. “And some of them would have hatched….”

God has opened a window of opportunity in India. People who do not know Christ are more open than at any time in modern history. National Christians want to be trained to plant churches in every slum, village, and city in this nation of 1.2 billion people.

To make this happen, we need to start the multiplication process in as many villages as possible, as soon as possible. The cost of holding back is not one missed opportunity, but all the future workers and churches that could be produced.

Oh, about that dead chicken: the only solution was to go into the market and buy another live bird!