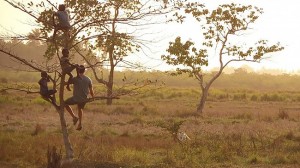 West Africa (IMB) — This is a first-person letter written by International Mission Board missionary James Burch after Ebola struck the West African village where he served.

I have no doubt that pretty much everyone reading this, has heard at least a little bit about the Ebola outbreak currently going on in West Africa. You may remember that I actually wrote about it when it was just starting back in March. As I penned those words a few months ago, I never could have guessed the impact that this disease would have. So many things have changed. So many lives have been claimed. So many families unexpectedly altered.

This somewhat “no name” country that I stepped into eight months ago now has the world’s eyes on it. Honestly, it’s been strange to have a front-row ticket to it all. We have watched Ebola spread on our maps, and we have seen the fear that seems to lie heavy in the air. But it was never on our doorstep. Though we were close, we still had the distance between the stage and our seats. However this past week, Ebola came home. We have now had a confirmed death from Ebola in our village/town. Even though so far it has only been one death, the news is still sobering. We have seen it move from a small village to now multiple countries, so we are forced not to take even this one death lightly.

So the question now is: what do we do? Do we stay? Do we go? [Our company] lets us make our own decision, as long as they consider us to be capable of doing so. They fully support us in strategically staying, or strategically going. So, we are left with a choice. And for now, that is to stay. I know many will question this decision, but that’s okay. Opposed to popular (at least secular) thought, we aren’t trying to be some heroes. We are just ordinary people trying to follow an extraordinary Lord.

Years ago, each one of us gave our lives to Christ. But even before that, two thousand years ago, Jesus purchased our lives by giving His. He paid the price in full, so that means our lives are no longer our own. They are His, and He can use them as He sees fit. He has still given us peace to do His work here. He has still provided us a way to be effective in the community, maybe even more so.

I have no idea what lies ahead. Someday, maybe even soon, it may come to a point where we could better serve in a different location than we are now. However at this moment, all we know is that time hasn’t come yet.

We ask for continued prayer for this region as a whole and for Ebola to be stopped in its tracks. More importantly, we ask that people would see their need for Christ in this pressing time, and in fact, at every time. We ask that you plead the Spirit to do His work here, because eyes cannot be opened without Him. And also we ask for the Lord’s wisdom as we continue by His grace to follow wherever He may lead.

So yes, Ebola has come home. Yet even now, we rest in the fact that though this thief has come only to steal, kill, and destroy, Christ has come that these beautiful hurting people here may have life and have it abundantly.