West Africa (MNN) — Ebola. The mere mention of the virus plague creates dread because it’s a losing battle once it appears.

When you add the word epidemic to Ebola, it sends alarm and panic skittering through the international community.

That’s exactly what’s happening in West Africa now. An outbreak is cascading out of control in Liberia, Sierra Leone, Côte d’Ivoire, Senegal, Mali, and Guinea-Bissau, leaving a trail of death and putting entire communities at risk.

In response to continuing reports of new cases and deaths attributable to Ebola virus disease (EVD), the World Health Organization (WHO) activated a Sub-regional Outbreak Coordination Center on 16 July 2014 in Guinea.

As of five days ago, the cumulative number of cases attributed to EVD in the Guinea, Liberia, and Sierra Leone stands at 964, including 603 deaths. It’s also not connected to the earlier outbreak in Uganda and Congo. According to the Associated Press, it’s linked to the human consumption of bats carrying the virus.

WHO records show the virus first appeared in 1976 near the Ebola River in the Democratic Republic of Congo, and authorities think it was originally spread by fruit bats. Gorillas, chimpanzees, forest antelopes, and porcupines can also spread the virus. Reach Beyond Wayne Pederson says, “People travel freely across the borders, and that’s how it is spread. We anticipated sending a mobile medical team this summer into Monrovia, Liberia, Sierra Leone, that part of the world. We just decided not to because of the danger involved.”

Even though they decided not to send a mobile medical team in, he adds, “We do have one person on the ground that just reported yesterday that the Ebola virus is expanding throughout all of Liberia.”

Pederson goes on to say, “Kathy Mazzella, who is a nurse, is going with a team to some of the other facilities in Monrovia, helping to train new nurses since this is quite new to the people there.”

Kathy and her husband Andrew joined HCJB Global (now Reach Beyond) in 2011 after serving as radio missionaries in Alaska and on Saipan since 1987. Andrew is an experienced radio broadcaster and administrator. He is currently serving as the Short-term Worker Coordinator. Kathy is walking into a death zone. “She’s replacing an RN that just reported seven new Ebola babies admitted in the last 48 hours.”

It is a terrible virus with no cure. Ebola has a fatality rate of nearly 90%. It inflicts excruciating pain on victims as they hemorrhage before death. Today, the victims must be quarantined because the virus spreads so easily. As a result, they die without the comfort and care of their family and friends. That’s the kind of heartbreak the Reach Beyond team is facing every day as they minister to Ebola victims in Jesus’ Name. “All their mothers had already died, and they’re clinging to life themselves, so to see the human side of this apart from the statistics is pretty heartbreaking.”

Pederson adds that because of the spread throughout Liberia, it’s hitting ministry, too. “We’re dealing with some of the realities of it. For example, we’re working with ELWA, and some of the Liberian ELWA staff are afraid to show up for their shift, which adds to the stress of the situation both on the radio side and on the medical side.” 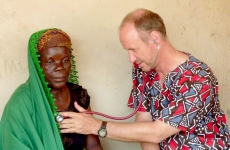 The team works around the clock to contain the deadly virus. “Pray for the protection of our medical personnel there. They’re obviously exposing themselves to a very dangerous and often fatal disease. I would also ask that we pray that they would have boldness and opportunities to share Christ’s love with those that are dying. We pray that, somehow, the Ebola virus would be isolated so it doesn’t spread further.”