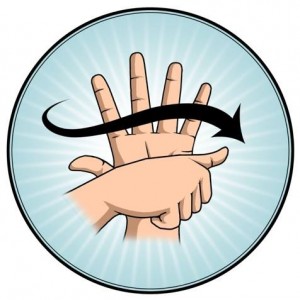 International (MNN) — Bible study is a key part of discipleship.

But, “How do you teach a Bible study if you don’t have a Bible, and nobody in your small group or Bible study group has a Bible?” asks Mike Buus,  founder of DOOR International.

There is currently no country in the world where a complete translation of God’s Word is available in Sign Language.

Because they don’t have the Bible, a very small percentage of Deaf people have been evangelized. An even smaller percentage has been discipled.

It’s been said that all great people and things have small beginnings. Such is true of DOOR International.

Back in the early ‘90s, soon after the fall of the Soviet Union, Mike Buus and his wife were in Romania teaching North American missionaries how to plant churches in the newly-freed Soviet territories.

“In that class, there was a North American missionary who was deaf, and her husband interpreted that training for her,” Buus recalls. 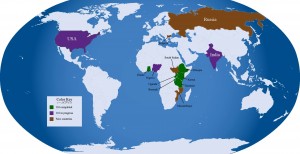 “Unbeknownst to me, she contacted a group of her friends back in the United States and said, ‘You need to contact Mike because he can teach people who’ve never been to Bible College or seminary how to plant churches.’”

After gentle persistence on behalf of the woman’s friends, along with a little research and some wise words from Linda, Mike took about 8 deaf individuals from Indiana and two translators under his wing.

“The thing that really got to me was when they said, ‘If we’re in a church long enough, they’ll challenge us to use our spiritual gift. We will almost always end up with a broom or a rake in our hand, because how [would] we teach a group or sing in a choir?’” Buus shares.

Two years later, when the disciples had been trained in church planting and their group had grown from 8 to 10 eager learners, Buus says he and Linda reassessed.

“We came up with this big, wholly-audacious goal of saying that we were going to train and equip a deaf Christian leadership team from every country of the world in one generation.”

Fast-forward a couple of decades, and they’re well on their way. 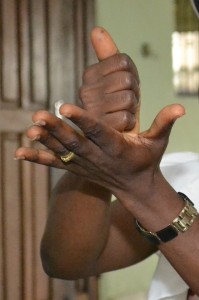 “I have been ignoring one Scripture portion from James thinking it is not relevant to the Deaf world: the same Scripture portion which says the tongue is like fire, it can burn the whole body. I was very interested to know how they connected this to the Deaf world teaching point. Later I understood that the tongue is representing the spoken words. The hand is equally relevant to the Deaf. The Deaf person has to be careful in using his hand when they sign, not to gossip, or hurt others or sin with it. This has helped me to know all the Scriptures are true to everyone who wants to know the truth. This has touched my life. I thank God for the sign language Bible translation.”
(Photo, caption courtesy DOOR International via Facebook)

DOOR, working with translation teams of national Deaf people and Wycliffe Bible Translators, is on the cutting edge of beginning “Deaf-hands” Bible translation projects into the Sign Languages of the world.

The Word of God can hardly transform lives if it’s not shared, though. That’s why DOOR sends deaf missionaries two-by-two into unreached deaf communities around the world.

“Deaf are storytellers, and they pass information through telling each other stories,” Buus explains.

That’s why DOOR International missionaries use Bible stories ranging from creation to the cross to introduce others to Jesus.

Today, “We have literally thousands of deaf believers in Africa and India that are now studying the Bible in their own language and are being taught by deaf who’ve been well-trained to explain the stories,” shares Buus.

“But it’s a small beginning. There may be as many as 350 sign languages in the world, so there’s a lot of work to do.”

Tomorrow, we’ll take a look at how YOU can help DOOR International cross the finish line.