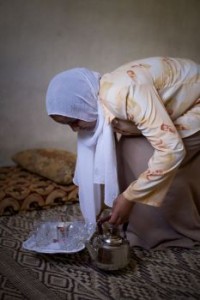 Near East (OM) — [Editor’s Note: Nicole James is a freelance journalist, ESL teacher, and adventurer. A communications intern for OM MENA, she’s passionate about publishing the stories of God’s works among the nations, telling people about the wonderful things He is doing in the world.]

Every week for two years, Operation Mobilization worker Dana* traveled to a village in the middle of the desert to provide therapy for a small boy with cerebral palsy.

One day, when Dana and her teammate Missy* arrived at the boy’s home for their therapy session, they noticed several visitors crowding the family’s small sitting room. The mother, Dana found out, had given birth the day before. Still in pain and weak from labor, she was lying on a floor mattress, entertaining but not engaging the bevy of her friends visiting to offer their congratulations.

As Dana and Missy entered the salon, Missy prayed for an opportunity to share something spiritual with the women. After 10 minutes of conversation, the women began asking the two foreign girls spiritual questions.

“Usually, when I start talking about Jesus, the Bible, and especially the Injil [New Testament], they will say it’s corrupted, so I’m used to that,” Dana explained. This time, though, the conversation became heated–the women dismissing the Bible and Dana defending God’s Word.

In the middle of the discussion, Salima*, the boy’s mother, who had been quietly lying on the mattress, suddenly sat up and addressed her friends.

“Listen, you don’t know these foreign girls who have been coming to my house every week,” she said. “They’re doing therapy with my son. They’re doing it because they love God. You should listen to what they’re saying. They know what they’re talking about.”

Quieted by Salima’s admonition, the woman who had most vigorously opposed the Bible “suddenly became so humble,” Dana remembered. “She said, ‘You know, actually in my whole life, I’ve never even seen an Injil. Do you have one for me?’”

“You can bring it to my house next week, and I can give it to her,” Salima broke in. Dana agreed.

As promised, the next week Dana brought a New Testament for Salima’s friend. But the moment Dana handed it to Salima, the woman reverently pressed it to her chest and flipped through the pages. Realizing Salima was just as interested as her friend, Dana brought Salima another New Testament the following week.

Week after week, Dana provided therapy for Salima’s son and shared with her about spiritual truths. One week, Salima also had a handful of questions for Dana.

“Why are you here?” she asked Dana and Missy. “You come from a foreign country; you don’t get a salary for what you do. You are coming here, in the middle of nowhere. It doesn’t make sense to me.”

“We are so thankful for what God has done in our lives,” Dana responded. “Because of our thankfulness, we are wanting to give back and share the love we have for other people.”

Seeing Salima’s interest, Dana continued. “Jesus has paid my sin. If I die today, I know I will go to heaven.”

“Insh’allah,” Salima replied: If it is the Lord’s will.

Since receiving the New Testament, Salima has been very interested in spiritual things, Dana said. “What we didn’t know is that her husband had also been really interested.”

Because women and men do not mix in the conservative village, Dana and Missy had never spoken to Salima’s husband. However, having seen a difference in his son due to the continued therapy, Ali* showed up at the therapy session one week.

Not only interested in the therapy procedures, Ali asked Dana the same questions his wife had directed towards her the previous week. In the middle of the conversation, Salima jumped in. “And she knows she’s going to heaven!” she exclaimed.

Faithful visits over the next months reaped deep spiritual conversations with husband and wife. Dana said, “Before we knew it, we started sitting next to him, reading the Bible together, reading about the crucifixion. [He was] asking, ‘What does it mean to be born again?’”

Although Dana had been reading the Bible out loud during these initial discipleship opportunities, she eventually gave Ali an audio Bible to listen to as he worked. She also connected him with a male worker living in the region, and the two men made plans to study God’s Word together.

Ali and Salima were the first people in the village with whom the girls could share the Gospel.

“Our hope is that the whole family will become believers,” Dana said. “Something that I really saw as a theme of my ministry there is that God brings beauty from ashes. He used the ashes of a child with a disability–the hopelessness of that–[to open] up the door for the Gospel to come into that house. If that boy didn’t have the disability, we probably never would have been able to go into that house.”

Pray that Ali would continue to meet with the man discipling him. Pray that the couple would come to faith, and that they would be able to spread the gospel throughout their village.