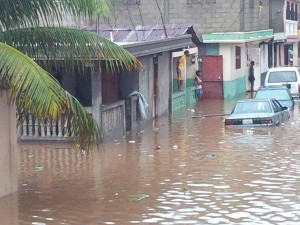 (Photo courtesy For Haiti With Love)

Haiti (MNN) — In April, parts of northern Haiti were in drought. Now, they have the exact opposite problem, says For Haiti With Love president, Eva DeHart. “Everyone is praying for sunshine. We need the rains to stop so some of this stuff can start draining off and people can find out where they are [in terms of damages/loss].”

A week’s deluge may have seemed like an answer to prayer with the drought, but DeHart says there’s nowhere for the water to go. “Even when it wasn’t raining for a little while, the water level was still coming up because it’s draining from the mountains. There have been mudslides; houses slipping off into nowhere. People are losing their homes.”

Haiti’s Department of Civil Protection said a vast number of crops have been damaged and livestock killed in Northern Haiti. At least 6,000 homes were flooded, and at least 66 homes were completely destroyed in a region including Cap-Haitien and several nearby communities. At least a dozen people were killed, and more are missing. Many of the survivors are displaced. Those same people have lost pretty much everything, explains DeHart. “Our security man came to work with no shoes because everything in his house had been washed away. They don’t have food, they don’t have clothes. They haven’t had any power of course, because of the water.”

Most of the disaster has gone unnoticed on the international scene. As a result, few aid groups are responding. Haitian Prime Minister Laurent Lamothe released 34 million gourdes ($741,718.50 USD) to help in Cap Haitien, also the location of For Haiti With Love’s headquarters.

DeHart is quick to note that their HQ facilities have been spared flooding because they’re on a mountain. It’s a good thing, too. People will be coming for help. “Any time that they’re coming to For Haiti With Love’s gate, they’re coming for God’s help.” She details what they are planning to do. “The girls have managed to keep the clinic open every day for people that are getting injured by debris and things sliding down the mountain.” Plus, “I had just shipped a whole bunch of clothing and shoes that were intended for Christmas, so they will open up those things and start distributing them ahead of Christmas.” 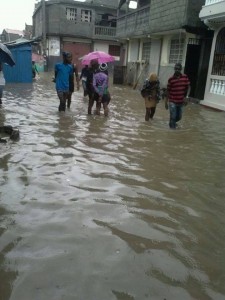 (Photo courtesy For Haiti With Love)

Even with clothes and medicine available, there are still issues of shelter, clean water, and food. “We do have food in place right now, but of course, they cook on charcoal. They can’t cook right now until they find some dry land and some dry charcoal. And, they’re losing this next crop that’s coming in because all the fields are flooded.” It’s overwhelming, especially because 2014 has been a year filled with disaster, financial trouble, and supply issues. DeHart admits, “We’ve been there the longest, probably, but we’re definitely not large enough to cope with what’s going to be needed after this.”

For Haiti With Love openly shows God’s love by following the Lord’s commands in Matthew 25:35-40 to feed the hungry, clothe the naked, heal the sick, and shelter the homeless. Wordless ministry is a compelling approach, but sharing the Word of God is part of what they do, too. Please be praying for the team as they respond, and if you can help financially, too, click here.