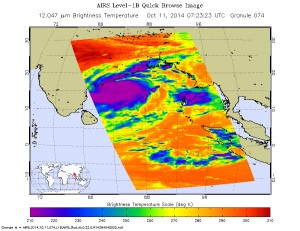 Cyclone Hudhud’s arrival fell exactly on the one-year anniversary of Cyclone Phailin. Phailin, largely overshadowed at the time by Typhoon Haiyan’s wrath in the Philippines, struck northeast India on October 12, 2013 carrying wind speeds at around 127 mph.

Lindsay Ackerman of Grand Rapids, Michigan-based Mission India says they partner with believers who were affected by both storms.

“Many people live in homes that are made of mud or straw, or perhaps they’re just in tents–nothing that could ever stand up to the strength of a storm,” Ackerman says, explaining why recovery is such a long process in India.

As Mission India’s partners recover from Cyclone Hudhud, they’re going to need your prayers. Pray for safety and for opportunities to introduce their neighbors to Christ.

“Stepping forward in prayer really gives much comfort and strength, especially to believers there,” Ackerman explains.

“And that then gives them the strength to minister to others in their community who are affected, and to encourage them and walk alongside them.”