Cuba (MNN) — When the possibility of normalizing relations with Cuba became reality, it was greeted by cautious optimism.

Last Thursday, a group of lawmakers introduced legislation to lift the trade embargo with Cuba. At the same time, the U.S. Agriculture Coalition for Cuba announced plans for a “learning journey” next month, involving more than 75 leaders from across the U.S. agriculture industry.

It’s all good news, but the question might really be: who is learning from whom? FARMS International President Joseph Richter says the Cuban people are very resourceful. “They have learned to do things with very limited input. In fact, recently I read an article where the Cuban inputs were 1 calorie of input for every 12 calories of output. Our American agriculture system and Canadian system, it takes 12 calories of energy to produce 1 calorie of food.” 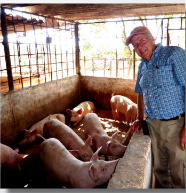 In the years FARMS has been operating in Cuba, they’ve seen people do a lot with a little. Now, with restrictions lifting, “People are catching on a little more to the idea that they can do something on their own and have their own private enterprise.” Up until now, FARMS programs have been largely agricultural. “Hog raising, chicken raising, vegetable farming, and one of our loans was for a tractor that’s used for plowing and transportation of goods.” With the open window widening, “We have a carpentry project that will be for furniture making. We also have some sewing projects scheduled and some other small businesses.” Plus, “We’re expanding. We’ve started another loan committee, and there’s a third one possible in the country. Continue to pray that there’s an open door for this type of thing.” 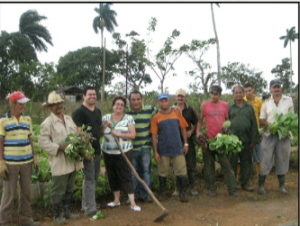 Helping boost the Cuban economy isn’t their only aim: helping the Church is. Richter explains, “When a family has an average income of about $10-$15 dollars a month, you can imagine the offerings in the church are very small. It really hinders outreach, typical evangelism, those types of things, and pastor support.” They also partner with a group that does leadership training so that future Church growth is sustainable. “They’re seeing leaders trained, and more and more people being equipped for doing the ministry. I also think that the FARMS program, the way it’s designed with the giving, helps disciple believers.”

Richter says cautious optimism is still the name of the game. There are still a lot of restrictions placed on the churches and also on enterprise by the present government. However, he adds, “There certainly is an optimism and thankfulness for the FARMS program because it’s impossible to get a private loan in Cuba for a family. It’s almost unheard of, so for people to get ahead, it’s very difficult.”

Keep praying as FARMS expands their work in an ever-expanding economy in Cuba. Richter shares, “One of the concerns I have about an opening is that maybe even Christian organizations will come into the country and start to make people dependent on the West.” Pray for wisdom for the ministry as they look for the right places in which to invest.