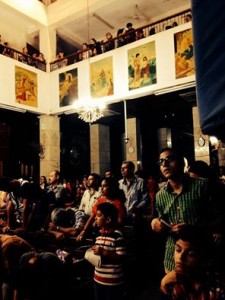 Egypt (MNN/E3P/ODM) — Egypt’s Coptic Church just celebrated Christmas. It was groundbreaking this year. Here’s why: The country’s Muslim president joined a Christian service. There’s hope that this is a sign of his commitment to tackle religious intolerance. *8thirty8, a Facebook prayer ministry of E3 Partners, urges continued prayer.

Even as President Abdel Fattah Al-Sisi joined a service at Cairo’s Abbasiya Cathedral, the religious tensions surfaced at another church. Police across the country were guarding churches, but gunman killed two officers who were on duty at a church in Minya, just south of Cairo. On Tuesday, another officer died trying to diffuse a car bomb in Giza, just west of Cairo.

In recent years, according to Open Doors USA, Christians in Egypt–not only Christian converts from a Muslim background, but also the large indigenous Coptic community–have endured intensifying pressure.

However, Christians have been more specifically targeted by extremists since the overthrow of the Muslim Brotherhood. Islamists claim that Egypt’s Christians played a disproportionately large role in the mass protests that preceded then-President Mohammed Morsi’s ouster.

Would you pray that God would change the hearts of the extremists? Believers are also praying for the unity of all churches, for God to use Christians from all denominations to reach out to their neighbors in love, and for a return to stability.

*8thirty8 is a challenge to set your alarm for 8:38 PM and pray for believers who are either in prison, persecution, or danger (Romans 8:38-39). To join the 8thirty8 prayer movement, click here.