Syria (MNN/AINA) — While more than 40 Assyrian Christians have been freed by Islamic State terrorists, the news isn’t good for those either still in custody, or those who have been released. This story is to help put a face to the Islamic State victims. 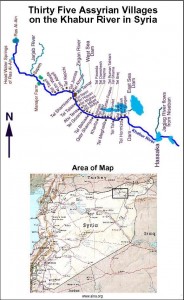 35 Assyrian villages attacked by IS along the Khabur River in Syria.

Six-year-old Mariana Mirza, was one of the approximately 40 people freed this week, two days after her parents were released by the same group in Syria. ISIS attacked 35 Assyrian villages February 23 along the Khabur river, in the Hasaka province in Syria. They captured between 262 and 373 Assyrians.

Assyrian International News Agency (AINA) spoke by telephone with one of the Assyrians who was captured in Tel Goran and subsequently released. His name is Robert (name changed). He gave a full account of their ordeal, from the moment they were captured to the moment they arrived in Hasaka after being released.

Robert tells AINA, “There usually are guards in the village. On that day, the guards left for Hasaka at 4 A.M. ISIS entered the village at 5 A.M. and knocked on our doors and awoke us. They rounded us up–everyone in the village–and placed us in a small room. On the other [north] side of the river, there were Kurdish and Assyrian fighters, and we could hear the exchange of fire between them and ISIS.”

After that they were taken to the Abdul Aziz Mountain. Robert says, “They placed us in two small rooms. We spent the night there. They asked us to convert to Islam.” 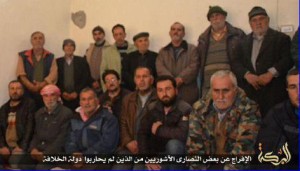 From there, they were placed in homes for five days. Robert tells AINA, “They kept pressuring us to convert to Islam; it was their constant focus. But we were not mistreated. We said we would not convert. They said you must then pay the jizya [a Christian poll tax] or leave the country. That was the option given to us. We said we would pay the jizya, but we would not convert.”

However, IS members decided to release them because those with Robert had not fought against IS. “They said that they would release us on condition that we not return to our village. They said if we returned and they captured us again, they would kill us without any other option: they would behead the men and enslave the women.”

Robert says they were provided food, water, and everything needed. However, he says he won’t be going home. When they were released, “They again said that we must not stay in the country. If they captured us again, they would kill us. We cannot return to our village. We will very soon go to Lebanon.”

Food for the Hungry is doing all they can to provide for the needs of these victims. Through churches and their partners on the ground, FH is able to quickly and effectively reach the most needy families who urgently need help right now. While helping physically, they’re also able to help spiritually.

You can make a life-saving difference today as you stand with Food for the Hungry. Perhaps you can give $25, $75, or maybe even $125. Whatever you can do today will help provide basic necessities for these families in crisis. Click here to donate.