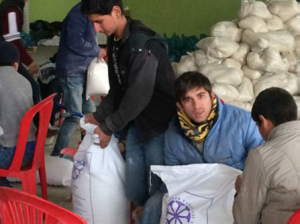 Turkey (EFCA) — As temperatures drop, new needs arise for refugees in Turkey. Especially now, in the middle of winter, being a refugee is literally a cold reality. In the area of the Syrian-Turkish border, overnight temperatures for the past several nights have been in the low thirties.

But the response to this refugee crisis is being felt in tangible ways. A coalition of ReachGlobal donors and partners in this region recently reported the delivery of over 30,000 pounds of food, tens of thousands of garments including winter pajamas, hats and coats, and thousands of household items including blankets, heaters, and soap to several thousands of families.

These families are living under tarps, in tents, abandoned buildings, and vacant homes generously offered by towns people. Some are crowded into tenements and others are in government-run camps. The circumstances are similar in southeastern Turkey, but also across Jordan and Lebanon. Having had the privilege of visiting with a few of these refugee families, many have had horrible experiences in fleeing and deal with fear, loss, and despair, while searching for hope, relationship, stability.

It’s a strategic opportunity for the Church.

One ministry partner shared, “There is no better way to express gratitude for faithful saints who have partnered with us in ministering to the refugees from Iraq and Syria and who are now living in the southeastern part of Turkey. Your generosity has opened many doors for the believers here in Turkey to share gospel truth with these refugees, but also with many government officials in the region.”

At the same time Christians are helping meet real physical needs as well. Helping refugees in one city opened the door for Christian workers to lay hands and pray for the town’s ailing mayor. In another city, officials were so thankful for the assistance, they convened and hosted a meal for our partners. This is a big step on historically hard ground.

The number of refugees in Turkey is estimated to be 1.5 million, with another 2 million in Jordan and Lebanon.

In the fall of 2014, ReachGlobal set a 3-year goal of raising $250,000 to help the refugees escaping the conflict surrounding Syria, with a vision to tangibly minister Christ’s love among the refugees, building relationships, multiplying disciples, and planting churches, so that as the refugee community either returns to their homeland or disperses to other parts of the world, a mature church with trained leaders will also go.

ReachGlobal celebrates that thus far, over $60,000 has been given. Thank you for your generous response, and you can continue to engage in these ways:

For a cessation of the violence in Syria and Iraq; for the Holy Spirit to open doors to the Good News, and for the Church in Turkey, Jordan and Lebanon to be a tangible express of grace for these displaced peoples. Praise that several churches have already expressed interest in sending short term teams to Jordan this fall. Pray for more churches to send teams in 2016 and 2017.

Send a team to Jordan to work with refugees. Serve as a window of grace and hope.

ReachGlobal continues to seek churches that would consider making the above vision a strategic focus for 2015-17. Several churches have expressed interest in sending short-term teams to Jordan this fall.