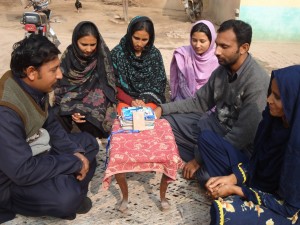 ‘The Treasure’ is designed to be used in a
group listening setting.
(Photo credit World Mission)

Executive Director of World Mission Greg Kelley says they’re calling it Coast-To-Coast. “It’s literally a 4,300 mile swath of land from the Atlantic Ocean in Senegal all the way to the India Ocean in Somalia, and it’s literally where 200 million people live.”

Kelley adds, “It’s where some of the harshest persecution takes place in the world. It’s where brothers and sisters in Jesus who are living in incredibly difficult circumstances need our prayer; it’s where so many Muslims live that Jesus died for, who have never heard the Gospel message.”

How much progress have they made? Kelley says, “We’ve distributed about 200 Treasures, so far, in each of these countries.”

Treasures are solar-powered audio Bibles in their heart language. Kelley says these palm-sized digital audio Bibles are tools because printed Bibles aren’t received openly. “Just the mere sight of it causes rejection. They’re so hostile to Christianity that they just don’t accept the Bible in any kind of an open sense. So, The Treasure comes in. It’s very non-threatening. It looks like a radio.”

Because of that, Muslims are more open to listening to it. “We’re hearing every week [about] Muslims coming to Christ through being exposed to the Word of God. It’s the power of the Word of God that changes the heart of man.”

According to Kelley, as Muslims are able to listen to the Gospel, they begin to crave it. That’s where you can help.

$50 provides a Treasure, as well as the resources needed to transport it to those who need it. But, Kelley says, it doesn’t stop there. “Once these people get exposed to it, they really have the heart of a missionary: they want to share it with their friends and their family and people who have not been exposed. They’re like, ‘Wow, I’ve got this amazing gift, and I’m not going to keep it to myself. I’m going to share it with other people!'”

To supply 12 Treasures costs just $50 a month for 12 months. Click here for details.