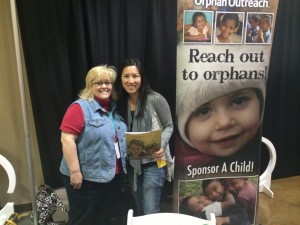 Orphan Outreach spent last week in Nashville at the International Christian Alliance for Orphans Summit encouraging more than 2,500 Christians to reach out physically and spiritually to orphaned kids.

Tiffany Taylor with Orphan Outreach says, “We’re presenting best practices for mission trips, how to run an orphan ministry, helping churches get involved in how they can make a difference for orphans through getting their congregations involved on so many different levels.”

The week was all about updating those concerned about the global orphan crisis. Taylor says, “Before the regular summit kicked off there was also a research summit on Wednesday when they presented the latest findings on the best practices on how to deal with orphans and the difference people can make with orphans.”

Taylor says Christians are adopting or fostering some of these kids, but “we’re really here as an option for all those children who are left behind. The vast majority of children in orphanages have no chance of being adopted either in their country or internationally coming to the United States.”

The local church has a responsibility to help these kids, says Taylor. If they don’t have the resources, that’s when the western church can come alongside and help.

Every child wants a mother and father. And that’s a platform for Christians to get involved. “These children may not have a physical mother and father, but we can tell them about their Heavenly Father. We can lead them to a relationship with Jesus Christ. That is our #1 goal.”

Orphan Outreach would like to encourage you to get involved in orphan ministry. Here are a few suggestions: You can support an orphaned child in one of the seven countries in which they serve. You can also join an existing trip, or plan a group/church trip of your own. You can also support young people who are getting ready to age out of the orphanage system who need support as they begin their life out on their own.