Laos (VOM/MNN) — [Medical malpractice is a serious charge. But it’s recently been used to incriminate five church leaders who were only responding to a sick woman’s request to pray for her. The following report comes from Voice of the Martyrs,] 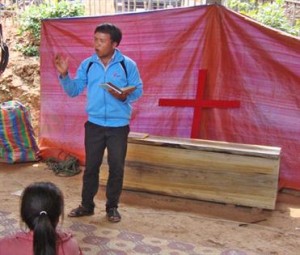 A Christian leader gives comfort to mourners during a believer’s funeral service in Laos. (Photo and caption courtesy of Voice of the Martyrs)

Five Christian leaders in Laos were charged with medical malpractice after praying for a sick woman who later died. The Christians were ordered to serve nine months in prison and pay a fine for causing Mrs. Chansee’s death.

Mrs. Kaithong, Mr. Puphet, Mr. Muk, Mr. Hasadee, and Mr. Tiang are all local church leaders in Savannakhet province. The five have been in jail since the woman’s death in June. On Feb. 2, they were found guilty of “treating [a person] without an official [medical] license, causing her to die,” sentenced to nine months in jail, and fined. The Christians did not have legal representation during the trial.

The ordeal began after Mrs. Chansee, a new convert to Christianity, asked for prayer on June 19, 2014 after she became severely ill. The five leaders from surrounding villages came together and prayed for the woman’s healing for two days. After no improvement, they took her to a local hospital where she was given a blood test, IV fluids, and oxygen. In spite of this medical treatment, Mrs. Chansee died shortly after being sent home.

Police did not investigate the cause of death, and authorities blamed the Christians for her death. During the funeral service on Sunday, June 23, 2014, authorities arrived at the family home and tried to force the family to recant their Christian faith.

After an appeal was filed at the district level, the Christian leaders stayed at the home to await the outcome with the family. The next afternoon, village authorities arrived with military forces and arrested the five Christian leaders. A few hours later, the village authorities brought in Buddhist monks who performed a funeral service, and Mrs. Chansee’s body was taken and buried in the village cemetery, which is off-limits to Christians.

Mrs. Kaithong, Mr. Puphet, Mr. Muk, Mr. Hasadee, and Mr. Tiang were locked up at a sub-district prison where they were kept in handcuffs and their feet were fastened in wooden stocks. Court documents stated that the Christians had claimed “to heal every sick person without resorting to any medication at all,” ignoring the fact that the Christians had taken Mrs. Chansee to the hospital for treatment.

Though local authorities and an attorney appealed to district authorities, they were prevented from helping after the court case was moved to the provincial level.

While the five remain in prison, several human rights organizations are seeking to provide legal assistance.

Please pray that legal assistance would be made possible for these Christians. Ask God to comfort their families and congregations.