Uganda (MNN) — [Editor’s Note: this is Part 2 of the story involving albino children in Uganda, Christmas, and Every Child Ministries]

These kids are the lowest of the low in their societies. They are despised, rejected, and considered cursed (or smitten by God).  ECM has been working in Tororo, Uganda, establishing a center to help these children.

Is this starting to feel familiar? According to Luke’s gospel, the angelic announcement of the birth of the Savior of the world that first Christmas came not to important dignitaries or kings, but to shepherds tending their flocks in the middle of the night. While the recipients of the message were certainly important to God’s plan, equally so were the sheep they watched.

Rouster explains how this connects to their work. “Even if everybody else around them is rejecting them, Jesus is still standing there with arms wide open to receive them. Many of those children have really not heard the Gospel before, because when you’re rejected, you don’t go anyplace extra. You don’t want to go to church when you know that you’re going to be rejected. So, they oftentimes are really glad to hear that there is somebody there that cares about them and really wants to receive them.”

Although ECM doesn’t yet have a child sponsorship program running in Tororo, they hope to launch one soon for children like John, a 6th-grade boy with albinism. “People like John are amongst those that are rejected on a human level, and yet God sent His Son for John, too. We hope to take that message of the love and the acceptance of God to John, to his family, and to those of his community and to everybody there, especially during the Christmastime, but of course, year-round as we share the Gospel with them,” Rouster explains. But hope changes everything. In spite of the rejection, “He wants to become a doctor specializing in albinism. He’s motivated to do that because even in the health clinics, he finds that many times the nurses fear those children with albinism. They don’t want to touch them.” 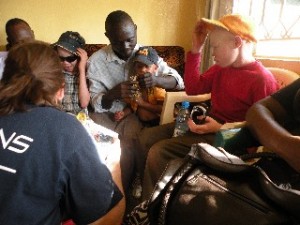 The plan for 2015 is to work with the schools and help the teachers and classmates understand more about albinism. Changing superstitious thinking is a challenge, but doable. “We really would ask the listeners to pray for the school outreach next year that we’re going to be trying to emphasize, and to pray that the families that are affected by albinism will gladly come to Jesus.”

Click here to find out how you can help.