Iraq (CAM/MNN) — The following is an update from Christian Aid Mission, your link to indigenous missions, on both Christians and non-Christians who have fled from ISIS and have great needs. 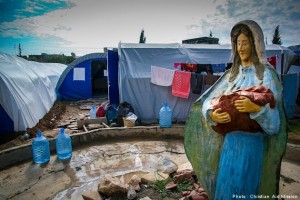 A statue of Mary symbolizes the church aid
displaced Iraqis found at a church-run tent camp
in Ankawa, outside Erbil–unlike in Dohuk.
(Caption/photo courtesy of Christian Aid Mission)

The mainly non-Christian Iraqis who went to the northern city of Dohuk after fleeing the Islamic State (ISIS) this year have less help than the many Christians who went to Erbil–a golden opportunity for a locally-based ministry.

Displaced people from villages, towns, and cities in Iraq’s northern province of Nineveh who made the mountainous trek to Dohuk, a city of 280,000, did not find the large, welcoming church presence that displaced people did in Erbil’s outlying town of Ankawa, which helped to provide tents, food, and medicines. Needs far outstripped supplies even in Erbil. At least 600,000 people–five times as many as arrived in Erbil–went to Dohuk.

“They ended up in the streets and under the trees. They live in any building they find, any building under construction, and they just lay their head there,” said the director of a local ministry providing aid in Dohuk.

He noted that many of the arrivals were Yazidis, who practice a blend of Christian, Zoroastrian, and Islamic rituals. Long labeled “devil worshippers” by Muslims, the fleeing Yazidis were especially hated and targeted by ISIS. Many came from Sinjar, also known as Shingal, populated mainly by Yazidi Kurds, undertaking the 3-5 day journey to Dohuk on foot.

“A lot of Yazidis living in the streets were in a state of shock. They saw a lot of killing of their family members, fathers, brothers, and daughters kidnapped,” he said. “I was giving out a sandwich to a Yazidi man in Dohuk, and the man responded, ‘What are you giving me? Food? My kids are taken. I lost two daughters.’ Some said, ‘I lost my wife, what are they going to do to her?’ and they would start weeping.”

Ministering to these people’s spiritual needs was even more daunting.

“You don’t know what to do,” the director said. “These people are Yazidis; they aren’t Muslims and they’re not Christians. We offered to pray for them, but it was sort of meaningless to them because they don’t know Christ. But some of them said, ‘Just pray to any god, because I do need help.’” 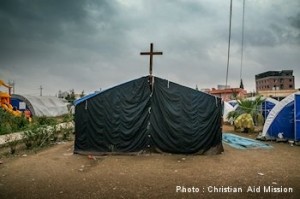 In an Ankawa tent camp, a makeshift chapel even emerged. (Caption/photo by Christian Aid Mission)

“Winter has started, so they need heaters,” he said. “Where the people are living they need tents to be replaced with buildings with real walls. So we started buying huge plastic tarps to cover their area. In Erbil they have tents, but in Dohuk they sleep in the open.”

The government provides the IDPs a small monthly food ration, but it’s not enough, the director said.

“And the government does not give medicine,” he added. “They don’t give mattresses, or covers or pillows, stuff like that. And we are doing this. In three month,s we distributed over 6,500 mattresses. In October, when it started getting cold, we distributed 3,500 blankets.”

The director said that on a recent visit to Dohuk he went to a building used as housing, expecting to find only a few Yazidi families; but his locally-based team was swarmed by 500 children: a sign of their overcrowded quarters.

In an Ankawa tent camp, a makeshift chapel even emerged.

“Everybody had a need,” said the ministry director. “I took a list; I said, ‘OK, who is sick here? Who’s hungry? Who needs a mattress?’ I had three lists, and to my surprise, the list of sick people was the biggest one. One of the children was crying because he had an infection because he stepped on a needle or something. He had a bad infection and he was like less than a year old–almost a baby.”

Another child had an ear infection that had begun to affect his brain; he had begun losing his memory. The director asked him if he could find a doctor, and the child along with others only replied, “Who’s going to take us to the hospital?”

The ministry has begun operating a mobile medical clinic in northern Iraq to provide for such needs. It is a large van equipped with medical equipment and supplies.

The director spoke of a married 17-year-old Yazidi girl he met whom ISIS had taken for 96 days. She was raped nearly every day by four men.

“She said, ‘They took me under the cries of “Allahu Akbar” [God is greater]. I was taken from family, from my husband,’” she said. “In 96 days she attempted suicide four times, but she didn’t die for some reason. She tried to hang herself but couldn’t. She drank poison, but for some reason, I believe, God let her live.”

At last ISIS sold her as a slave for $500 to a family friend pretending that he didn’t know her.

“So when he bought her, he called the family and said, ‘Hey I have your daughter. Come and get her,’” the director said. “This is one of thousands of stories. So we need to do more than just provide help. We sometimes just bow our heads and feel with these people, pray with them, cry with them. When they see the tears, that gives them some healing. And then the next step is, ‘Here is Jesus Who can save and heal.’”

To help indigenous missionaries meet these overwhelming needs, you may contribute online using the form here, or call 434-977-5650. If you prefer to mail your gift, please mail to Christian Aid Mission, P.O. Box 9037, Charlottesville, VA 22906. Please use Gift Code: 444IRAQ. Thank you!