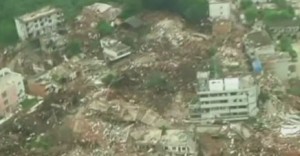 China (MNN/BGR) — Another earthquake has hit the country of China. This time, it hit in rural Yunnan Province in the southwestern part of the country.

Soldiers have been dispatched to assist first responders in the search for survivors. Teams trying to deliver much-needed supplies are struggling to reach the area. Rain and landslides have left many roads in the area impassable.

Jeff Palmer with Baptist Global Response says they have a team of nationals already there. “We were able to actually mobilize one of our disaster response teams to assess the area very quickly within the first few hours–about six or seven hours after the earthquake.”

How has the China earthquake affected the region? Palmer says, “Initial reports indicate about 400 people have been killed, and between 40,000 and 50,000 homes have been destroyed.”

“BGR-trained national personnel are in the affected area, assessing the needs of those impacted by the earthquake,” said Pat Melancon, BGR’s managing director for disaster response. “Many of the roads into the affected area are blocked, and downpours make the relief effort hazardous due to landslides from loosened earth from the quake. The assessments will focus upon the four life-saving sectors involving water, shelter, food, and health-related issues.”

According to Palmer, having their trained team on the ground is essential to physical and spiritual assistance. “We’ve given them the credentials. We’ve given them the training. They bring the local culture. They are believers. They are very compassionate in their work, so they’re trained how to respond in disaster. But they’re also trained how to share their faith as they go along.”

In 2010, BGR helped in the Chengdu earthquake. That response helped thousands. It also helped build the church. Palmer says the first goal is just to help needy people through local Christians. “Doing it through them gives us a unique opportunity to give a positive testimony for our faith and also actively share the Gospel.”

This is an area that’s challenging for outsiders. “It’s a little bit of a sensitive area–a lot of minorities. A lot of foreigners like you and me can’t go in.” That’s why local trained, credentialed Christians are needed to help.

The earthquake was the strongest to hit the mountainous area in at least 14 years. BGR partners responded to two other earthquakes in the vicinity in September 2012 and April 2014. More landslides are expected because previous earthquakes have loosened mountainsides. Most of the mud-brick homes will have crumbled in the quake, but the assessment team is praying they will find some villages where homes have been spared.

You can help people in need during a crisis like this by donating to BGR’s Disaster Response Fund. Click here to donate, or give $10 by texting BGR to 80888.

If you text to donate, $10 will be added to your mobile phone bill or deducted from your prepaid balance. Message and data rates may apply. Must have account holder permission to donate.