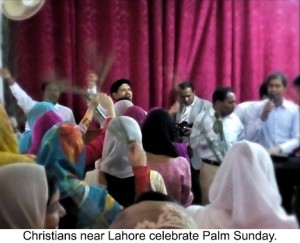 Pakistan (MNN) — One common lesson for children, whether at school or in a children’s book, is the difference between fear and bravery.

To call Christians facing extreme persecution in Pakistan completely fearless at all times may be an unfair expectation. It’s more fitting to call them courageous.

Jacob Busscher, international coordinator of Crossroad Bible Institute, shares how their program has opportunity to encourage Christians in countries all around the world who are facing deadly struggles.

Last month, suicide bombers targeted two churches in the area of Lahore, Pakistan. At least 14 people were killed and more than 70 were wounded.

A Crossroad student, *Ibrahim, assisted the wounded and ran a blood drive following the incident.

Ibrahim connected with CBI about three years ago as a prisoner. Busscher says, “I smile every time because in all actuality, it was through Facebook.”

Ibrahim’s participation in CBI’s international program has helped CBI better understand the environment in Pakistan. And it’s been encouraging for Ibrahim to engage in a relationship with Christ in such a tangible way.

Of Ibrahim, Busscher says, “We know that he was a Christian prior to entering this program, and on behalf of our program, he has been able to introduce his extended family to Christ.”

Crossroad Bible Institute has multiple ways for prisoners wanting to be students to get connected. While CBI offers satellite campuses at many locations, these are not necessary in order for a student to be connected with CBI.

They have international students in Turkey, Pakistan, Ghana, and other places around the world.

In a recent article by CBI, Ibrahim was reported saying that Christians are not afraid of the persecution.

Either way, these Christians are being brave.

“Being a Christian in Pakistan,” Busccher says, “you must have this boldness knowing that you’re not only a minority but the political sector–the government sector–does not necessarily represent you in the same method that they would a Muslim or a Hindu simply because you a are a minority.”

When you help out…

He shares one way that anybody can help right this moment: “Continually praying for patience but also a community in which they can further understand and further delve into the Bible.

“Many of these students, especially if they’re international students without a satellite campus, may or may not have a Christian community around them. And those that don’t are often looking for someone who also knows the Bible, who they can talk to, who they can relate to about some of these very personal beliefs.”

Believers in the West might not be conscious of it very often, but connection to the Church is vital for these Christians to keep growing.

“Prayer is just such a powerful and necessary item, especially for these students who are looking for ways to stay connected to the Church or to Christianity and their beliefs,” says Busccher. Pray that these believers will able to “spread the Gospel as they’re learning more about the Savior that we all love.”

Busscher thanks listeners for staying connected and helping CBI as they engage the imprisoned population around the world. If you’d like to support them took, click here.