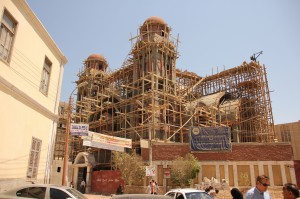 SAT-7 USA recently shared more details about church reconstruction and the state of Christians in Egypt in a trip report from their sister ministry, SAT-7 UK. The text below comes directly from SAT-7’s Web site.

“There are three phases for the construction and renovation of churches damaged during the violent Brotherhood attacks after the sit-ins at Rab’aa and Nahda squares in August 2013,” reads an update Farid Samir, Executive Director of SAT-7 Egypt.

“The first stage lasted until June 30, 2014, and the basic construction work has already been completed for ten designated sites. During the next six months, work will start on the second phase, and then the third phase, which is scheduled to end by June 30, 2015.”

On August 14, 2013, a man with a megaphone stepped out from the Khodeiry Mosque and entered Palace Square in Minya, Upper Egypt. He delivered a simple and chilling message: the bloodshed being unleashed in Cairo on supporters of ousted President Mohamed Morsi was the fault of Egypt’s Christian minority.

Over the following days, mobs torched and ransacked Christian establishments across Egypt, claiming to be avenging state violence against Morsi supporters. 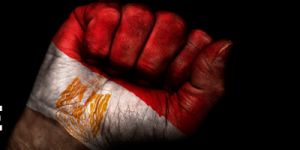 By the time the violence ebbed, 65 churches and monasteries, 22 buildings associated with Christian ministries, and more than 100 Christian shops and houses had come under attack, according to a list published online by Bishop Ermia, the president of the Coptic Orthodox Cultural Centre in Cairo. Coptic activists said five Christians had been killed, and while the exact number of casualties was unknown, Minya’s Coptic bishop, Abba Makarios, said two Muslims had died defending a church there.

Almost a year later, I entered one of the churches that had been attacked, burnt, and razed during the unprecedented outbreak of hatred. Remarkably, the reconstruction of this three-story Orthodox Church in the center of Minya is well underway. The ground floor is being used for services. I arrived just as morning worship had finished.

Pray that all the phases of rebuilding will be completed and that the restoration of church buildings will lead to the spiritual encouragement and edification of Egyptian Christians and their neighbors.

Groups of bright eyed children were running around the church as parents and grandparents sat and chatted animatedly. When we explained that we worked for SAT-7, they immediately greeted us like celebrities, such is the appreciation and affection for SAT-7 by Christians in the Middle East. The children explained that they watch SAT-7 KIDS almost every day when they return home from school. 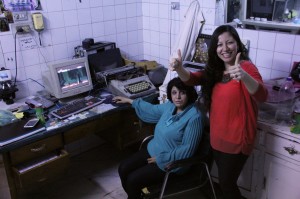 Later, I visited Dr. Jaquelin and her mother Nadya (pictured) in their medical lab in Minya. They and their family are Christians and avid viewers of SAT-7. Jaquelin said that during the attacks, they had stayed at home for days until they felt it was safe to go out to buy food. Watching SAT-7 ARABIC and SAT-7 PLUS during those days strengthened their faith and gave them hope. “Please don’t stop broadcasting,” she said. “SAT-7 is essential to us.”

From there, we went on to meet Bishop Makarios, Coptic bishop of Minya. He told me that all his congregations watch SAT-7, and children especially love SAT-7 KIDS. Children and young people are leading the way in showing love to their neighbors in Minya.

Want to make a difference? Your gift of $1 supports 1 viewer for 1 year; click here to give now!