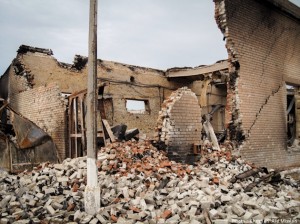 Exploding shells are destroying homes and churches in the Donetsk region, where Ukrainian security forces and pro-Russian rebels have been battling for control since March.
(Image, caption courtesy Christian Aid)

Ukraine (CAM) — Senseless violence in embattled eastern Ukraine took on added ramifications last week with the downing of a Malaysian commercial airliner near the Russian border.

As that investigation begins, new reports are surfacing of additional casualties of war: this time, Christians who are caught in the crossfire.

Christian Aid Mission has received word from ministry sources inside Ukraine that church leaders are being targeted by terrorists in the volatile Donetsk region.

A pastor, his two adult sons, and an elder have been missing since June 8, when they were kidnapped from an evangelical church in the city of Slovyansk. Some six weeks later, the ministry finally learned what happened to the four men.

The following report came from a Ukrainian ministry leader who is a long-time friend of Christian Aid:

These four brothers in Christ were kidnapped a month ago by terrorists. All the while their families prayed for them, not having any information of their whereabouts.

Only a week ago, witnesses revealed that on the night of June 8, terrorists abused and tortured them, and in the morning they let the men go. The elder deacon was driving the car. Once they left the city, the terrorists reappeared, chasing after them in a vehicle. They started shooting at the deacon’s car.

The pastor and his sons jumped out of the car to try to escape. They were shot to death immediately. The driver was also killed, and his body was burned when they set the car on fire. On the second day, fighters took the bodies and buried them with other victims in the same grave.

Just now the families of the four men received this information. All this time they have been waiting for their husbands, fathers, and sons to come back home.

The oldest of the pastor’s sons leaves behind a wife and two young children. The other son had three children. The elder deacon had eight children, and his wife is due to give birth to their ninth child in August.

This is by no means an isolated incident. For the past few months, church leaders from various Christian denominations have been threatened, kidnapped, beaten, arrested, and in some instances, killed, allegedly by pro-Russian supporters and militants. Some pastors have fled to the western part of Ukraine.

A spokesman for Christian Aid said the rebels are taking aim at believers because they support the Ukrainian government and its security forces. He surmised the abuse of pastors may be in retaliation for congregation members who give food and clothing to Ukrainian soldiers.

International Christian Concern (ICC) noted two incidents on its Web site. In May, Archpriest Pavel Zhuchenko of the Ukrainian Orthodox Church of the Moscow Patriarchate was shot dead near a roadblock post in the Donetsk region. Pro-Russian rebels were blamed for his death.

Days later the national bishop of the Ukrainian Church of God was abducted in Slovyansk. According to ICC, militants seized his church building and used it as a base for their operations. The bishop was placed in an isolation cell for several hours. He was released unharmed the next day.

Civilians living in the conflict zone have also suffered greatly, and thousands have lost their homes and possessions. Electricity and water have been cut off in some areas around Donetsk. 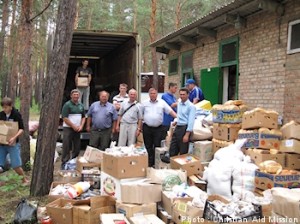 A ministry supported by Christian Aid is delivering food parcels and clothing to families impacted by the war.
(Image, caption courtesy Christian Aid)

“Christians of the western and central regions of our country are trying to help families who are going through tremendous pain and loss. The terrorists destroy everything: homes, schools, and even peaceful, innocent citizens,” said the leader of one Christian Aid-assisted ministry.

“We are grateful to God that there are people who do not stand aside during this terrible affliction. Several work teams are bringing in building materials and fixing up damaged homes. Pray for God’s protection over them day and night. We understand this is a big risk, but we cannot be indifferent when thousands of our brothers and sisters have nowhere to lay their heads,” he said.

The Ukrainian military reclaimed Slovyansk from separatists in early July. The city, located 90 miles from the Russian border, sustained heavy damage from the fighting. Power is expected to be restored soon, but the recovery process will take months, if not years. Ukrainians and ethnic Russians remain sharply divided on the issue of separatism.

Another Christian Aid-assisted ministry has been partnering with evangelical churches in western Ukraine to assist Christian families living in the war-torn east. Last week they delivered 27 tons of food and three tons of clothing.

“At first glance, that may seem like a lot of supplies, but for many thousands of hungry and hurting people, it is like a drop in the ocean,” said that ministry’s director. “The war rages on, and the number of needy people is increasing.”

These Ukrainian ministries are seeking financial assistance to provide food and clothing for additional families, as well as funds to replace windows, doors, and roofs on houses damaged by shelling. One of the ministries is also in need of tires for its large truck, so it can be used to deliver relief supplies to affected communities.