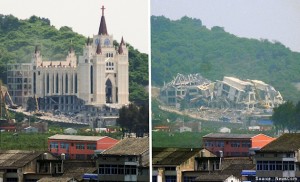 China (CAM) — Crosses have been forcibly removed from the rooftops of hundreds of registered churches in one eastern province in China, and more are coming down each month. Why the sudden crackdown?

During the past six months, one aggrieved congregation after another has watched helplessly as construction cranes yank the cross from atop churches in Zhejiang Province.

Chinese authorities defend their actions, claiming they are cracking down on “illegal constructions” of buildings, both commercial and religious. Christians have a different view, however, and fear the government is underhandedly trying to curb the rapid growth of churches in the region.

The assistant director for the China Division at Christian Aid Mission, your link to indigenous missions, was in the country visiting ministry leaders when news broke of the anti-cross campaign. That was in the spring, when 64 crosses were removed and demolished. In June the number of destroyed crosses doubled. According to International Christian Concern (ICC), now more than 360 churches have been targeted. Chinese authorities are threatening to demolish entire church buildings if congregants refuse to remove the public displays of their religion.

“When I was in China, the church leaders I talked to were very nervous about what was happening. They were concerned that the government was not upholding its own constitution regarding religious freedom,” said the Christian Aid worker. “They advised Chinese believers to be cautious and not take part in protests that might make the situation worse. They were praying that the crackdown would not spread to other parts of China.”

Last week, one congregation made international news when they did decide to take a stand. On July 21, a crowd of some 1,000 Christians formed a human blockade around ShuiTou Salvation Church outside the city of Wenzhou. It was the 32nd night in a row in which the congregation held a vigil to guard their church’s cross.

Around 3 a.m. local time, 400 police officers attempted to remove the cross by force and beat some of the Christians with iron batons, ICC reported on their Web site. After a one-hour attack, the police retreated, unable to accomplish their purpose.

The cross controversy began last October when the communist provincial secretary visited Wenzhou and saw crosses prominently positioned atop spires and domes on registered churches. The city is considered the Christian hub of China and is sometimes described as the “Jerusalem of the East.”

What seemed most incongruous to him, however, was the $5.5 million, multi-story Sanjiang Church perched on a hillside next to a freeway.

The secretary said the cross on the church was “too high” and “too conspicuous.” Furthermore, he claimed the building itself was illegal and violated codes.

“The media has reported that a year ago, the Sanjiang Church building was praised by local officials. It was a landmark in Wenzhou, and people were proud of it,” said the Christian Aid spokesman.

“But the church was very visible, with a big cross. The government also said it was five times larger than the approved size of 20,000 square feet.”

In March, the government increased pressure, stating if the cross was not removed and most of an auxiliary building torn down, the entire church would be demolished.

The church was asked to “self-rectify” by April 22, but only 5,382 square feet of the structure was torn down by the deadline. Church members refused to lower or remove the cross.

About 3,000 people peacefully occupied the church in shifts, inside and outside, to prevent a demolition. Their valiant efforts were not successful, however, as the Three-Self church was destroyed April 28.

Located in eastern China across the sea from Taiwan, Zhejiang Province is known for its affluence and has many wealthy entrepreneurs. Christian businessmen and professionals are among those who are enjoying the prosperity. Blessed with abundant resources, these congregations can afford physically impressive buildings like the Sanjiang mega-church. Many of these churches have large crosses prominently placed so that they tower over the surrounding landscape.

Some have argued that the believers in Wenzhou have inadvertently antagonized the government by making perhaps too bold a proclamation of their faith. Too much emphasis has been made on church buildings, they say, and not enough on building up God’s true Church–His followers.

The Christian Aid spokesman points out that the government did not order the churches to dispose of crosses altogether. What Christians were mandated to do was reduce the size of the crosses and move them indoors.

“I think when the provincial secretary came to Wenzhou, he saw all of those crosses. He saw the monumental Sanjiang Church by the freeway. He didn’t like the way Christianity was so visible,” the spokesman said.

The government insists it is clearing illegal structures throughout Zhejiang Province for urban renewal projects and is not singling out Christian-owned buildings. In Wenzhou alone, 32 million square feet of buildings–mostly commercial properties–have been demolished in the last year.

However, the issue remains:why officials would zero in on removing crosses. Are these religious icons in violation of a building code, or are they an advertisement for Christianity that officials feel they can no longer tolerate?

Frustrated by the battle of wills, Chinese church leaders have expressed their view that it is the government which is trying to make a statement. Under the guise of enforcing zoning laws, they believe the authorities are seizing opportunities to place a choke-hold on Christianity’s presence in the province.

So is the cross removal an all-out anti-Christian campaign? “Probably not,” the Christian Aid spokesman responded, given that the Chinese government wants to be more progressive regarding human rights than in times past. They would also be violating their own constitution, which provides for religious freedom, but with restrictions on the location and types of activities that worship entails.

Echoing the sentiments Chinese ministry leaders shared with him, the Christian Aid spokesman said it is important to make a distinction between man-made representations of our faith and the genuine worship of Christ.

“As Christians, we don’t worship a symbol of our faith or an idol. We worship a living God,” he said. “For true believers, what matters is our spiritual walk with the Lord and the cross that abides in our hearts.

“Yes, we are called to ‘take up the cross and die to ourselves.’ But Christ never called us to die for an outward structure,” he continued. “It’s another matter, though, if we are asked to deny our Lord. He is the One Who is worth dying for.”

No one knows how far the government will go with its cross-removal initiative. Christian Aid does not provide financial help to any of the affected churches in Zhejiang Province, as these congregations are all self-supporting. There are concerns, however, that government action taken against churches in one province may inspire copycat changes in other areas of the country.

“Only time will tell,” the ministry spokesman said. “What we can do is pray that the action by the government in this province is not the start of a wider crackdown on Christianity in China. Pray for the steadfast faith of believers in China, and that they will continue to do the Lord’s work in their country.”

Christian Aid has assisted indigenous ministries in China for 28 years by helping to establish Bible schools that train missionaries and church leaders, planting and fostering the growth of churches, and meeting the needs of orphans and impoverished rural communities.