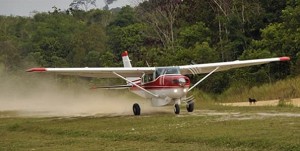 Brazil (MNN) — For the majority of the last decade, New Tribes Mission has been working to get a mission plane for Brazil.

You may not think about it, but there are many remote tribal villages in the western side of the country.

Wonita Werley, spokesperson for NTM Aviation, says, “It’s interesting to note that Brazil is the size of the United States with Texas put in twice. So it’s vast, and there are hidden groups of people–some that may not actually have ever been contacted yet.”

In previous years there was a missionary plane that serviced western Brazil, but there came a point where they could no longer do it. Since then, NTM has been working hard to get a plane running again.

Werley explains that many of these villages already have missionaries working in them. “But the work is languishing, in a sense, because there isn’t a good supply route to sustain the missionaries once they get into these remote areas.”

If a missionary ever has to get supplies for themselves or seek medical help, they have to travel for 3-10 days through jungles complete with poisonous snakes, biting insects, and the like.

Otherwise, they could wait for months until the next supply drop.

Werley says this realization is daunting to many missionaries. 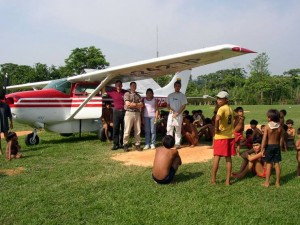 NTM will now have a plane operating in Brazil.
(Photo by NTM)

After many years, NTM finally has a Cessna 206 to be stationed in a remote city, as well as a mechanic ready to work. And until NTM has their own pilot in Brazil, they are working with pilots from other mission groups. For an outsider to get permission to fly in the country is a tedious, long process.

These legal hoops are only an echo of the legal challenges NTM has run into with getting their plane into the country.

“There have been challenges and more challenges all along the way. [It’s difficult] to work up a business plan, so to speak, that would be viable for this area of Brazil,” Werley says.

These legal challenges have slowed down the process to get personnel for the aviation program and to get the plane outfitted with necessary equipment for missionary duties. For nearly every practical step of the way, NTM has to get permission from the government.

How will it help?

For starters, teaching the Bible to remote villages includes a lot of work in language.

“Our people really need the airplane to be able to get technical help–linguistic help, translation help, even church-planting help and advice and encouragement into their tribe from time to time,” Werley says.

On top of these specialty needs, the missionaries need regular supplies for basic survival.

Despite the needs, Werley says about 80% of their missionaries in Brazil are Brazilian and don’t have the means to support the aviation program.

“We are really looking for people who have an interest and a heart for this kind of work to help us provide viable, affordable air transportation so our missionaries can get in and out. We have set up a group called Flight Crew.”

The flight crew is a way for people who are passionate about international missions (maybe aviation, specifically) to be able to participate even though they can’t necessarily travel. This program makes flying to remote villages in Brazil and other countries possible.

NTM asks you to pray for them. Right now their plane is sitting where it originally landed in Brazil. It needs to have its import documentation completed and then permission granted to fly anywhere else.

Werley says, “The hurdles are there again. And this is not something that money, necessarily, can even help. This is something that we can only go to the Lord and seek Him and petition Him to make the paperwork happen and make the permissions available. So we really need people to pray that this plane can get where it’s going.”

She asks you to pray for pilots for NTM Aviation in Brazil as well.

“We just are looking for people that we can connect with who are interested in this sort of thing, who really want to be part of the great commission–be part of reaching these people who really if we don’t get to them, they will live and die and never know that there is hope in Christ.

“So if that is your heart, if that is the kind of work you want to be involved in, we would love hear from you and see how you can be a part,” Werley says.

To get involved with Flight Crew of NTM Aviation, click here.