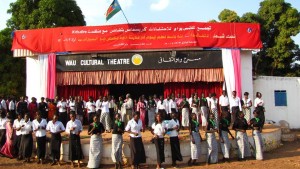 South Sudan (MNN) — In South Sudan, conflicts continue to rise between the government and the rebels. According to BBC, the fighting has caused over 50,000 deaths, around 235,000 children are suffering from hunger, and around 180 health facilities have been destroyed or unable to function.

Oil fields, which The Guardian says is more than 90% of South Sudan’s foreign revenues, are also being damaged.

BBC said a Chinese firm made a deal with South Sudan in increasing oil production. The China National Petroleum Corporation (CNPC) said they would use heavy oil recovery technologies to do so.

China announced that they are going to send 700 troops as United Nations peacekeepers to South Sudan. The Guardian says that for most of them, this will be their first time in a peacekeeping mission. And, though they will provide peace, they will be equipped with drones, antitank missiles, and several other weapons for self-defense purposes.

Many are doubting that peace will come soon. Though kids seem to suffer the most, they seem to be the ones with the most hope.

On Christmas Day, in the city of Wau, children refused to listen to the fighting and conflicts casting shadows on the day.

Kids Alive International said the children were determined to share the Word of God and the story of the Prince of Peace. They organized a celebration, inviting church members, the community, and government officials to sing and enjoy plays on the stage.

Kids Alive Sudan Field Director Francis Tombe said, “It was a wonderful day that brought the joy of Christmas to Wau, united the churches, and gave renewed hope to many people.”

This was an incredible way to celebrate and affirm the true source of hope: not the government, but Jesus Christ.

Continue praying for families, refugees, and the government to be transformed in South Sudan.