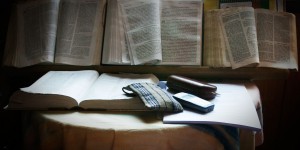 USA (WYC/MNN) — Nearly 50 years ago, the U.S. Congress designated September 30 as Bible Translation Day: a day to honor the work of Bible translation around the world.

Did you know there’s a day set apart worldwide to honor the work of Bible translation? Well there is, and we’re excited to tell you about it!

“September 30 is St. Jerome’s Day,” Townsend said. “He’s the first translator of the whole Bible. I thought maybe we could get the House and Senate to pass a resolution calling for the president to proclaim September 30 as Bible Translation Day.”

On September 30, 1966, a ceremony was held to proclaim that day as Bible Translation Day.

Since the Apache New Testament had only recently been completed, Townsend decided they should present that translation as part of the ceremony. Senator Harris presided, and Townsend arranged for Britton Goode, the Apache who had helped the translators, to present the Scriptures to him and Congressman Ben Reifel. 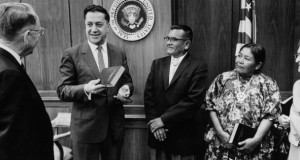 A Sioux Indian from South Dakota, Reifel had witnessed firsthand the impact that owning the Bible in her heart language had on his mother, who spoke only broken English and used the Sioux Bible to teach her children about God.

Several people gave speeches that day, including both Senator Harris and Congressman Reifel. Townsend’s speech was, as always, one that left the group in attendance encouraged and inspired.

“We are making history. By God’s grace and with His help, we are taking part in a tremendous enterprise,” said Townsend, as he began his speech. “The enterprise is Bible translation; the goal is hearts changed by God and disciples equipped to lead others to Christ. But before any translation can be done, before any change comes in a heart, we must overcome physical and language barriers.

“The language barrier is difficult to overcome. But it must be done. The Holy Spirit, speaking through John says, ‘After this, I looked, and there before me was a great multitude that no one could count, from every nation, tribe, people, and language, standing before the throne and in front of the Lamb’ (Revelation 7:9, NIV). We believe God has called us to help make this verse come true….

“This is not an impossible task. If it were, God would not have given it to us. But it is difficult. It takes hard work, dedication, perseverance, and commitment. Teachers at Wycliffe’s schools have helped thousands of students learn translation and literacy principles, but we lack people who are willing to go. Many don’t realize how Bible translation is still needed around the world.” 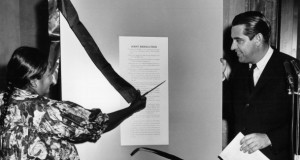 In the years since Townsend first started Wycliffe, 518 language groups have received the entire Bible, and 1,275 have the New Testament in the language they understand best. Additionally, over 1,500 Bible translation projects are currently in process.

Today, Wycliffe continues to carry on the tradition of celebrating Bible Translation Day. With unwavering focus towards the unfinished task at hand, Wycliffe seeks to pursue the goal that Townsend so eloquently laid out in his speech–that of bringing the translated Word of God into every language that still needs it.

See how Bible translation is changing the world around us.