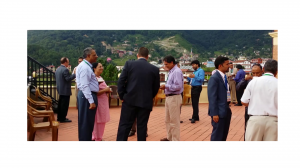 South Asia (MNN) — Two weeks ago, the Pakistani Army started shelling Indian positions along the Line of Control, or more accurately: the border between India and Pakistan.

Ceasefires, violations, control. That’s what a decades-long conflict is boiling down to. Recent peace talks haven’t made a huge headline splash, maybe because the peace talks weren’t following the traditional diplomatic lines.

Despite the state conflict, says Shibley, “There was no contention between the delegates at all. In fact, it was wonderful to see what the Holy Spirit did in a real unity of heart and purpose to see this area of the world be discipled for the Lord Jesus Christ.”

Here’s one reason why: these were leaders of the body of Christ. The biblical message of peace they share unites them. It was born out of a Lausanne committee meeting several years back. Putting feet on the dream took longer. “We convened 16 months ago the first Tri-Nation Summit. This was the second one following up and allowing for a greater development of strategy for each one of those nations.” As the 2013 Summit concluded, delegates agreed to pray and fast on the third day of each month, which laid the foundation for the 2015 gathering. 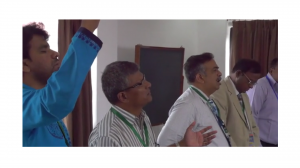 Once the leaders came together, they discovered the joy of common purpose. In fact, the joint prayer meetings could be considered a breakthrough for the Gospel in this region. It puts the phrase “peace talks” in a whole new light. “They met together individually…as national representatives and came away with fresh new plans for fresh evangelistic initiatives in each of their three nations, and also for very creative ways to continue praying for each other.”

Shibley goes on to note that some of the leaders witnessed an answer to prayer 16 months ago that gave them confidence to move forward. “Immediately after the summit, India and Pakistan lessened their border restrictions. We think that was significant, and we think that it was an indication that the Lord really is up to something in that part of the world.”

Referencing The Kathmandu Commitment from 2013, Shibley says, “They came away with an emphasis in two areas: first of all, being sure that each unengaged, unreached people group would be reached. Most of them are targeting the year 2020. Secondly, [they came away with] a fresh commitment to the mentoring of young men and women who feel called into Christian vocational ministry.” They renewed that commitment once more. Global Advance is coming alongside church leaders with vital resources. The challenges these church leaders face carry more risk than ever before. “In certain pockets of these areas, the Church is growing at unprecedented rates, which is also increasing hostility against the Church and against Christianity in general. So, we need to be praying that believers will stand boldly, that they will be winsome, that they’ll be gracious.”